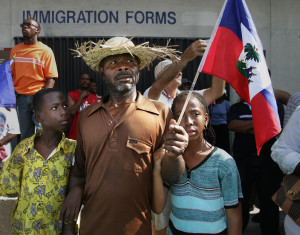 Miami, UNITED STATES: A Haitian man holds the Haitian flag as he stands with his son and daughter in front of the main US Immigration office building during a march in Miami 22 April 2006. Thousands of haitians took to the streets to oppose what they call “discrimination against Haitian would-be immigrants by the US immigration service”. The protesters said they opposed the different treatment accorded undocumented would-be Haitian migrants who reach US shores compared with the treatment given to Cuban migrants and other Central American immigrants. AFP PHOTO/Roberto SCHMIDT (Photo credit should read ROBERTO SCHMIDT/AFP/Getty Images)