Edmonia Lewis earned critical praise for work that explored religious and classical themes.
Edmonia Lewis was born on July 4, 1844, in Greenbush, New York, which is now the city of Rensselaer.Her father was Haitian of African descent, while her mother was of Mississauga Ojibwe and African-American descent. Lewis’s mother was known as an excellent weaver and craftswoman.Her family background inspired Lewis in her later work. When Lewis was about nine years old, both of her parents died within a year of each other. Lewis and her older brother, Samuel, were taken in and lived with their mother’s sisters for the next three years. Lewis and her aunts sold Ojibwe baskets and other crafts to tourists visiting Niagara Falls, Toronto, and Buffalo.
According to Biography:
Her first notable commercial success was a bust of Colonel Robert Gould Shaw. Sales of copies of the bust allowed her to sail to Rome, Italy, where she mastered working in marble. She quickly achieved success as a sculptor. The circumstances of her death, which occurred circa 1911, are unclear.
Early Years

Hailed as the first professional African-American and Native-American sculptor, Mary Edmonia Lewis had little training but 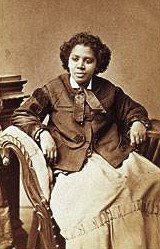 overcame numerous obstacles to become a revered and respected artist.

Little is known about her early life. Elusive when it came to personal details, Lewis claimed different years of birth throughout out her life, but research seems to indicate she was born around 1844 in upstate New York. Following a childhood that saw her roam the woods with Chippewa Indians, Lewis found her way to Oberlin College in Ohio, thanks to, it seems, the support and encouragement of a successful older brother. Oberlin was a hot bed for the abolitionist movement, a facet of school life that did not escape Lewis and would greatly influence her later work. In addition, Lewis’s time at the college was marked by her emergence as a talented drawer.

But life at Oberlin came to a violent end when Lewis was falsely accused of poisoning two white classmates. Captured and beaten by a white mob, Lewis recovered from the attack and then escaped to Boston, Massachusetts, after the charges against her were dropped.

In Boston, Lewis befriended abolitionist William Lloyd Garrison and sculptor Edward A. Brackett. It was Brackett who taught Lewis sculpture and helped propel her to set up her own studio. By the early 1860s, her clay and plaster medallions of Garrison, John Brown and other abolitionist leaders had given her a small measure of commercial success.

In 1864, Lewis created a bust of Colonel Robert Shaw, a Civil War hero who had died leading the all-black 54th Massachusetts Regiment. This was her most famous work to date and the money she earned from the sale of copies of the bust allowed her to move to Rome, Italy—home to a number of expatriate American artists, including several women.

In Italy, Lewis continued her artistic ascendency. Her work over the next several decades moved between African-American themes to work influenced by her devout Catholicism.

One of her most prized works was “Forever Free” (1867), a sculpture depicting a black man and woman emerging from the bonds of slavery. Another piece, “The Arrow Maker” (1866), draws on her Native-American roots and shows a father teaching his young daughter how to make an arrow. In addition to her religion-themed pieces, Lewis created busts of American leaders such as Ulysses S.  Grant and Abraham Lincoln.Perhaps her most famous work was a commanding depiction of the Egyptian Queen Cleopatra, titled “The Death of Cleopatra.” Met with critical acclaim when she showed it at the Philadelphia Exposition in 1876 and in Chicago two years later, the two-ton sculpture never returned to Italy with its creator because Lewis couldn’t afford the shipping costs. It was placed in storage and only really rediscovered several decades after her death.Final Years
Much like her childhood, Lewis’s final years are shrouded in mystery. Until the 1890s, she continued to exhibit her work and was even visited by Frederick Douglass in Rome, but little is known about the last decade or so of her life. Speculation indicates that she died in her adoptive city of Rome , Italy, sometime around 1911, but even that is unclear.

In recent decades, however, Lewis’s life and art has received well-deserved respect. Her pieces are now part of the permanent collections of the Howard University Gallery of Art and the Smithsonian American Art Museum.

In 2021, #KodakBlack received a proclamation durin