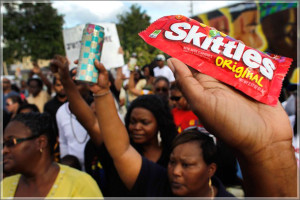 MIAMI, FL – MARCH 21: Protesters hold cans of ice tea and Skittles which is what the 17-year-old Trayvon Martin is reported to have been carrying when he was killed by neighborhood watch person, George Zimmerman on February 26 in Sanford, Florida, on March 21, 2012 in Miami, Florida. The Justice Department and the FBI opened an investigation into the death of the black teenager, and the local state attorney announced that he had asked a grand jury to investigate. (Photo by Joe Raedle/Getty Images)