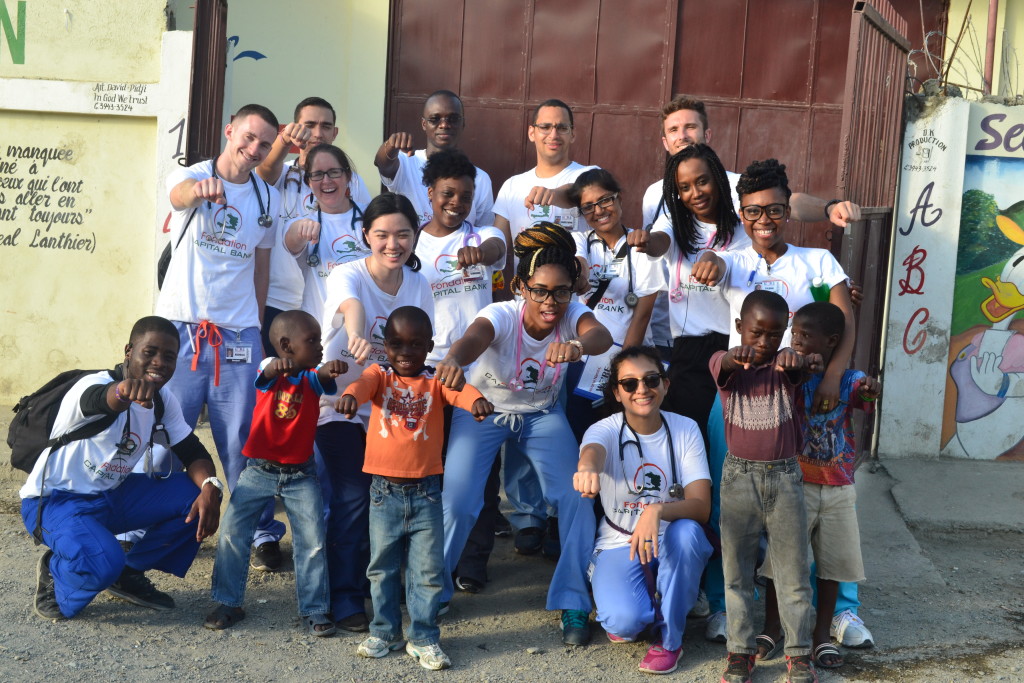 With everyone fatigued from the previous day, it was astounding any of us were awake early enough to attend church. But sure enough, a group of us took off on the bus and headed to the 8 a.m. service.  The majority of Haitians you’ll find are Catholic, but it would be an exercise in futility to explain how important and integrated religion is in Haitian culture. It was refreshing to see a group of people from all over the world immersing themselves completely within a culture in order to understand the population they were treating. We walked into the service as they were singing from the main book of songs, “Chants d’esperence, ” or Songs of Hope. As we sat down we could hear everyone in the room singing in unison a powerful thank you for the grace of God. Despite the language barrier, it took but a simple glance at each individual’s face to see how heartfelt the message was.

After a few minutes of prayer, there was a brief break for church members to meet and greet new guests.  Everyone welcomed us with smiling faces, as they have been expecting us for many months.  Two group leaders, Wil and Stevenson, were invited to give our thanks to the people of St. Michel for hosting us and announce the upcoming clinic days. The founding members of the organization, Stevenson, Sam, and I were invited to the front of the church to be introduced by the pastor, who is also the wonderful Mayor of St. Michel. After a brief introduction, we were able to give a history of our goals as an organization. We stressed the importance of education and described how meaningful the sessions would be for all of them.

We quickly boarded the bus and headed towards the orphanage.  Led by a husband and wife from the U.S., the orphanage housed thirty amazing children. The children were housed, schooled, and attended church through the Living Hope organization. We were met by anxious, shy faces, but all of them were clearly excited to meet us.

We split the groups in two, boys and girls. The girls started off by playing with play dough. No one in the group had ever seen such a moldable, odd-smelling toy, so we explained what it was and all the different designs you could make with it. I walked around translating, seeing the small children laughing as our team made them snakes, hearts, bracelets, and smiling suns. Some kids talked about their dreams of becoming nurses or doctors and others simply wanted to see the next design so they could try to make it themselves.

In the back yard, a heated game between the third year medical students and the boys was taking place. Dust was flying everywhere and we were easily outmatched. They had a group of shoeless 5- to 15-year-old boys who played as if they had been professional football players all their lives.  Within a few minutes the score was 3-1. We regrouped and were able to take the lead 7-4. We decided the game would be first to 8 points, and upon reflection, they must have just toyed with us the past twenty minutes.  Within a few short minutes, a pass here, between the legs there, and a couple of falling medical students, put them at 7-7. We were depleted, but knew we could pull out the win. We regrouped and talked about our strategy. In an amazing upset, we… lost, 8-7.

We thanked the wonderful organizers of the orphanage for hosting us, took a “second place photo” and told the kids that we hoped to return in the near future.

The next stopping point was the caves of St. Michel. Our driver, Ti frère, (little brother) has been with working with the pastor and his organization for more than a decade. He’s driven us whenever we’ve worked with the pastor, and one thing to note is that he’s a true Haitian driver. We came upon a small crevice that seemed about the size of my short wingspan. We needed to get through it to get to the caves. Ti frère somehow managed to squeeze the bus through the alley, with just enough space to stick a fingernail out of the window. After he passed through, the team was so impressed we all clapped in amazement. He didn’t even blink.

After a 15-minute hike up a steep hill, we finally reached the caves. Caves in the U.S. are more of an exploratory adventure. In Haiti, as are most things, the caves are a place of spiritual power. Our guide instructed us about special objects in the cave named after spirits. We came across a tree in the middle of the cave that had the odd appearance of a pregnant woman. “The Spirit of St. Mary, who when you pray upon will cure you of infertility and prevent miscarriages,” the guide explained. “The Spirit of Ti Jean, who when you pray upon will provide you good luck. Many people come from Italy, Brazil, and all over the world in order to use this to best the lottery and other aspects of life,” the guide explained as he pointed to a dark hole in the side of one of the many rooms of the cave. A few of us formed a circle and held hands to take a quick prayer in one of the “special areas,” although I can’t say in which one, otherwise it may not come true.

The guide described how the spirits within the cave would cause dreams in certain individuals, asking them to bring certain items to a particular region in the cave. One person asked why people would bring things they valued so much to the cave, knowing it could be stolen or lost forever. “When you make a promise [to the cave], you have to keep your promise,” the guide said softly.

We passed by the technical school on our way back to sketch the schematics of how the clinic would be taking place there tomorrow. After rounding out  the some of the details, we headed home for dinner and preparation.

The pastor, mayor, doctor (he has a Ph.D), and chaplain is clearly a man of many talents and accomplishments. But today he celebrated his birthday. To be honest, we celebrated his birthday, as we planned a small showing of appreciation and some music. His friends and co-workers around town jumped into the scene with champagne, and for a long twenty minutes, the pastor finally rested.

After that, Stevenson gave a powerful speech about his experiences in Haiti, and the lessons his hardships have given him over the course of 23 years. “Forgiveness, always be able to forgive others, as it is one of the most difficult, yet most powerful things you can do for you and another individual,” he stated, finishing up with the Golden rule of doing unto others as you would like done unto you. I would give you more details, but it’s like the Grand Canyon, no amount of description could fully express the experience.

The rest of the night was filled with students bustling throughout the living room, taking inventory, checking bags, counting medications, and pretending to be a functional humans being by 10 p.m. Despite some being sick, literally every student was helping in any way to prepare for tomorrow; it was amazing. I felt so blessed to be surrounded by such selfless colleagues who I would be working with in the near future. It was the warmest feeling I’ve felt in a while. I went in the room to finish up this note, lights were out, and most were in bed. It was almost midnight; we had to be up at 5 a.m for clinic. You could hear the faint voices of Labeena, Wil, and some of the other mission trip leaders trying to finalize the schedule. They promised to do their best to lead this trip. They kept their promise.