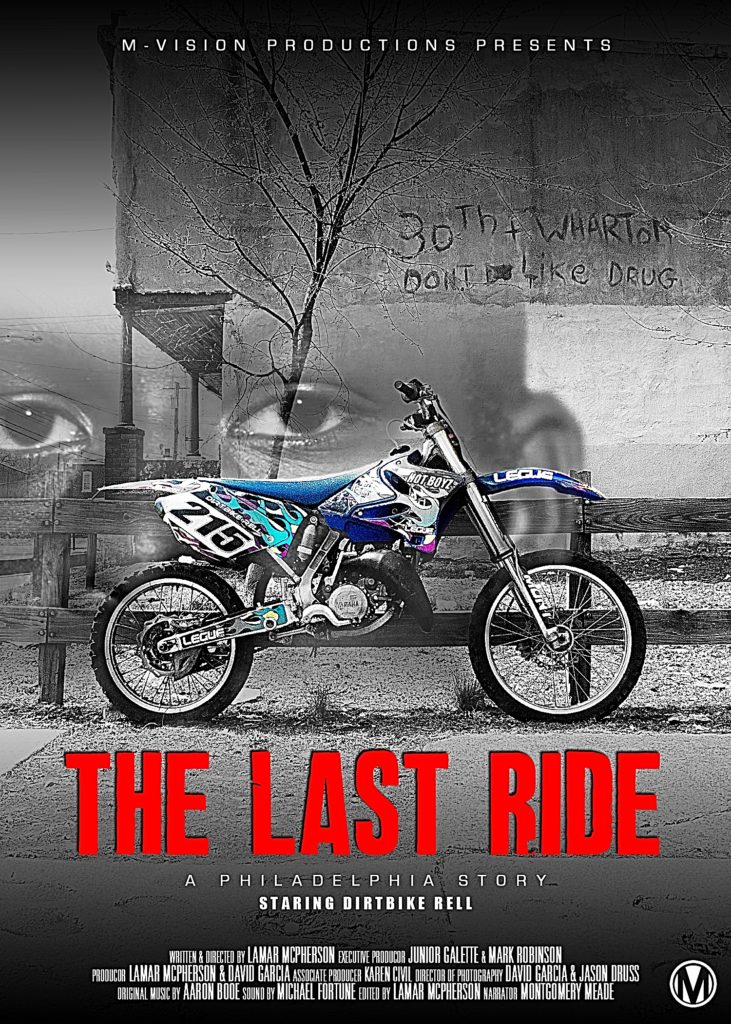 The Last Ride: A Philadelphia Story, will make its world premiere at Philadelphia’s prestigious Ritz East movie theater, presented by VILLA. Last Ride documentary is a relevant and timely documentary exploring why Philadelphia’s underground dirt bike community is so unique to the inner city youth and how the Cross Roads Motorsports championed for five of Philly’s best riders to represent their company on the racetracks. Rell, Prince, Pupo, Jay, and Mont invite viewers to experience the sensational ride and the ongoing topics of mass incarceration, race and education. Kyrell Tyler – aka – “Dirt Bike Rell” was murdered during the taping duration of the documentary.

The Last Ride documentary will premiere on Thursday, June 2 at 9 p.m. EDT at Ritz East, 125 S 2nd St, Philadelphia. Immediately following the premier, Last Ride documentary Director, Producer Executive Producer, and Associated Producer will moderate a 10-minute Q & A to explore the the issues and discuss the films efforts to bring awareness to the voiceless bike life community.

“The Passion and enthusiasm that Dirt Bike Rell had for riding is something that’s hard to find in America. Talking about a young man filled with all the athletic ability in the world but stuck to his true passion in riding dirt bikes, that’s something you don’t see everyday so I admire him for that alone, said Junior Gallete, documentary Executive Producer.

The documentary goal is to empower the Young Black and Hispanic men to pursue education and explore a professional career in what your heart desires. Last Ride also examines the misguided, fatherless boys, men and single mothers who fall victim to the endless cycle. “Last Ride, narrates the challenges faced by the previous and present men and women of our generations – and the lack of resources available to develop his or her skill, drive, and vision for a professional career in Motorsports, said Karen Civil, documentary Associated Producer.

“The Philly bike life identity reflects that of the City and its people. Blue gritty, rough, rugged & aggressive. The bike life is the only past time that brings people together from different sections of the city no matter sex, age, race or religion, “said Lamar McPherson, film Director. “I will never forget the pain, agony, and joy endured the process of producing this film. Rell was a special guy. His charisma and ability to bring people together was a testament of his star studied potential.”

The film features expert voices are from many of Philadelphia’s City Hall Council members. Guest experts include Councilwoman Blondell Reynolds Brown, Councilman Curtis Jones, Kevin Bethel Deputy Police Commissioner Philadelphia, among others. Having minimal to create opportunities end the possibility to support a strong pipeline of talent, and the Last Ride film is the step in the right direction.

“The Last Ride is one of those rare films that actually goes deep into a misunderstood world and gives the viewer an honest answer to the question “who rides these bikes” and “what is bike life?” The film doesn’t turn away from the artistry and grit of bike life, from the stunt shows in Middle America to traversing inner city streets with hundreds of other riders,” said Last Ride Producer, David Garcia.

Last Ride will show at the following times and locations, during the tour:

Why does this bother people so much? I've been doi

Legendary singer Alan Cave snaps a photo with his