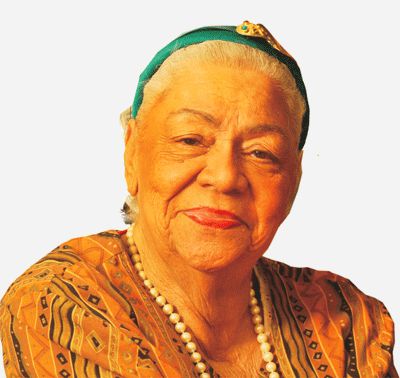 Paulette Poujol-Oriol, who died March 11 at age 84, left her birth country, Haiti, a legacy that is immeasurable. She was one of Haiti’s most ardent feminist leaders, as well as an unmatched cultural producer and worker.

She was born in Port-au-Prince on May 12, 1926 to Joseph Poujol, founder of the Commercial Institute, and Augusta Auxila, a homemaker. The family migrated to France when she was eight months old. Poujol-Oriol spent six formative years in Paris, where her parents were engaged in the worlds of commerce, education and theater. She credited this time in Paris as instrumental to her development as a renaissance woman. Poujol-Oriol began her school studies at the École Normale Supérieure in Port-au-Prince, then went on to Jamaica where she attended the London Institute of Commerce and Business Administration. She started to teach at her father’s institute at the age of 16. With additional studies in education, she dedicated herself to teaching, but never stopped her own learning. In addition to being fluent in French, Kreyol and Spanish, she eventually learned and mastered English, Italian and German.

But aside from teaching, Poujol-Oriol was writing. She published her first novel, Le Creuset (The Crucible) in 1980, winning the Prix Henri Deschamps–just the second woman to have ever received that prestigious Haitian literary award. Another work, La Fleur Rouge (The Red Flower) was awarded Radio France Internationale’s Best Novel award in 1988. Her novel Le Passage (Vale of Tears) was translated into English with a forward by well-known Haitian writer Edwidge Danticat.

And aside from teaching and writing, Poujol-Orio was an actress and playwright, as well as the director and founder of Haiti’s Piccolo Teatro, which

introduced children to the theatre arts. Over the course of her life as a prolific writer, relentless artist and activist, she became one of Haiti’s most highly acclaimed women, a recipient of acknowledgements and awards too numerous to name. As a staunch feminist activist, she battled for Haitian women’s causes and visibility in her writing as well as in practice. At a very young age, she defied gendered and classed restrictions, possessing a hunger for knowledge–encouraged by her parents–that surpassed social expectations of young women of her class. These made her a recognizable intellectual force. In an interview on Thomas Spear’s Ile en ile, Poujol-Oriol recalls being steered towards gentler literature by booksellers astonished by her ferocious passion for French classics. The sense that less is expected of women and that they should be invisible motivated many of her undertakings.

In many ways, Poujol-Oriol was both a product of her privileged socio-economic background as well as a challenge to its strictures. Highly visible and engaged in the world, she insisted on keeping her name when she married, bore two children, divorced and remarried–at a time when such practices (keeping your own name, divorcing, remarrying) were frowned upon in Haiti. All the while, she continued to pursue her art and social interests. In 1950, she became a member of the Ligue Féminine d’Action Sociale (Women’s League for Social Action)- the organization founded in 1934 to advance women’s rights in Haiti. She served as president of the League from 1997 until her death. She was also a founding member of several women’s associations, including L’Alliance des Femmes Haitiennes (Alliance of Haitian Women), an umbrella organization that coordinates more than fifty women’s groups. Baruch College professor and Haitian sociologist Carolle Charles met Poujol-Oriol in 2005 at the Caribbean and Latin American conference on women and citizenship. She remembers her “as a feminist organizer [who] also knew about the fragility of Haitian institutions, thus her strong support to newer feminist organizations.” That gathering was organized by Haiti’s only feminist research center, Enfofanm, directed by Myriam Merlet–one of the four well-known feminists who perished in the 2010 earthquake. At the conference, Poujol-Oriol, a member of the board of directors of Enfofanm, received a life achievement award for her contribution to the Haitian women’s movement. Her “level of commitment to the women movement,” says Charles, “was uncompromising.” She was a much beloved intellectual mother to hundreds of students, who called her mommy. She is survived by her actual son, physician Georges Michel, who resides in Haiti, and her daughter, Claudine Michel a professor of education and black studies at the University of California Santa Barbara. In Haiti’s Le Nouvelliste, her son is quoted saying, “She had lots of projects (plays, novels) [in the works]. Even at her age, she continued to write.”

Poujol-Oriol inspired generations of Haitian writers, artists and feminist activists. Speaking of her loss, Charles paraphrases the popular Haitian saying, “she came from a small country, but a great nation.” Then she added what other obituaries consistently insist: “She stood against injustice and inequality. She was a “poto mitan”–a formidable central pillar.

In need of an Immigration Attorney? Call Nadia Lew

On Bravo’s Race In America: A Movement Not a Mom

This or That Featuring 🇭🇹 🇨🇦⁠ 🎥