According to USA Today:

The United Nationssays that flooding from two days of rainfall in Haiti has killed six people and displaced 700 others. The U.N. Office for the Coordination of Humanitarian Aid said in a statement Tuesday that the deaths occurred in the north and northwestern part of the country. Two people died in a landslide in the area of Limbe and two others drowned while trying to cross a river. Two bodies were pulled from the water near the coastal town of Anse-a-Foleur.The floods also damaged 125 homes, crops and livestock. The rainfall that began April 8 displaced 700 people and 68 of them moved into shelters. The annual rainy season has already 6 people. They died last month in the capital area after mudslides crashed through their homes. – storysource

Gosh, my heart goes out to all these families and people who are already struggling to make it!! 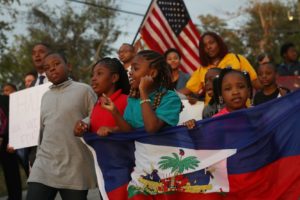 Haitian-American Nathalie Joachim is glowing in re

🙏🏽🕊💔 #Trajic TMZ is reporting that Kob

Legendary NBA player Kobe Bryant has died in a Cal

How Caribbean are you? 👀 📸 @thatnursecancook

Well didn't see that coming but it does make sense