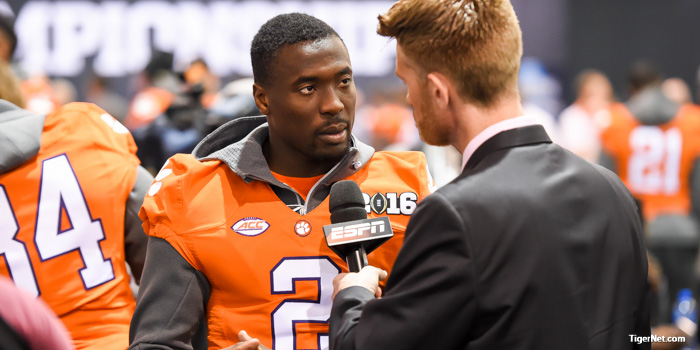 Just when you thought Haitian-American Mackensie Alexander story couldnt get any better.

Me and Mackensie chatted for a few minutes last week. He’s such a sweet guy, out of all the things to talk about his main priority was making sure I know how much he want to do to help build his country and his culture so I wasnt surprise when I read his first act as a professional ball player was giving back.

According to this ESPN article,

The contract Mackensie Alexander officially signed with the Minnesota Vikings on Friday will pay him $4.32 million over the next four years, including a $1.34 million signing bonus that immediately vaulted the 22-year-old into one of the nation’s top tax brackets.

Other than the possibility of buying a car for his mother, Alexander said he has no plans for a splurge purchase. In fact, the first significant investment he made after the draft was in kids who are trying to scale the same economic obstacles he faced.

Alexander worked out a deal with Adidas earlier this week to donate $10,000 worth of athletic equipment to the Boys and Girls Club in Collier County, Florida, where the second-round pick grew up picking fruit as the son of Haitian immigrants.

The cornerback’s story was highlighted in this SportsCenter piece over the weekend. His hometown swelled with pride after the story ran, and Alexander said Friday that the story was more about Immokalee, Florida — where more than 70 percent of the residents are of Hispanic descent and nearly 40 percent live below the poverty line — than it was about him.

Now, as he begins his career in the NFL, thousands of miles and layers of economic strata away from home, Alexander is trying to reach back toward those orange groves.

When Alexander was in high school — he estimated he was 14 or 15 — Immokalee High School product Edgerrin James saw Alexander working out on the football field. “I was surprised for him to be there,” Alexander said. “The first thing he said was — and I’ll never forget it — he said, ‘You don’t see kids like you working like this anymore.'”

The four-time Pro Bowler gave Alexander a pair of his gloves; Alexander said he still has them at his parents’ house.

Now, the cornerback is trying to use his new-found success to galvanize those who might follow him.

“There’s a lot of people in America that are successful, but they don’t come back home,” he said. “They don’t show their face, and the kids don’t know who they are. They don’t have anybody to look after, and that’s when you’ve got problems of kids being bad, going to jail, not doing positive things. I just want them to look at me as a positive outlet.”