The Prime Minister Laurent Lamothe declared “A people who did Vetières can not die or hang indefinitely in the wandering paths. Vertières it is education for all. Vertières it is the satisfaction of basic needs and respect for the fundamental right of all. Haiti must move forward! Haiti will move forward: Vertières is our light ! Vertièreis our pillar !” adding “The heroes of Vertières gave us a free and sovereign country, let’s build together the future of our people. On this historic day, I invite my brothers in the opposition to join the effort of national reconstruction. On that glorious day in our history I solemnly appeal to the group of 6 Senators inviting them to vote the electoral law. I call the honorable senators to unlock the democratic process. The opposition must break with the policy of chaos.”

For his part the Ministry of Communications, wrote “If Vertières left a bitter taste in the mouth of the imperialists, Haitians must strive to appreciate it at its true value […] This day that reminds the victory of Vertières is an opportunity for every son of the nation to understand the true scope of our moto.” “With 500,000 blacks over 700 plantations, toiling under the yoke of slavery, Vertières : the revolution was more than necessary […] The reasons for erasing memories of November 18 have their roots in the internal struggles and selfishness. Crowd together! Time is no longer to the infighting. We must divorced from the old practices following the example of unity of our fathers to Vertières,” added Minister Rudy Hérivaux. – Continue Reading Full Article Here

“The Battle of Vertières (Northern Haiti) is the last battle of the indigenous army against the powerful French army of Napoleon Bonaparte. It opposed the troops (about 2,000 men) commanded by French General Donatien to the indigenous independentist army of General Jean-Jacques Dessalines (about 27,000 men, including the 9th Brigade of commanded by François Capois), who won the final victory, forcing Rochambeau to capitulate.

November 18, 1803, General Dessalines ordered to take the fort de Vertières, located on a hill next to the city of Cap-Haitien. François Capois aka Capois-la-Mort commanded a half-brigade which was partly decimated by gunfire from the fort. He made a another assault, but his men were still broke at the foot of the hill by shrapnel. Capois ran to get reinforcements and for the third time, he threw his forces to attack the fort in vain and leaving again many deaths. In the fourth attack, the horse of Capois was hit by a cannon ball, down, Capois took his sword, got up and ran to get once again at the head of his soldiers, shouting “Forward! Forward !”. To strengthen the depleted battalions Capois-la-Mort, Dessalines sent reinforcements under the command of General Gabart, Clervaux and Jean-Philippe Daut. In mid-afternoon, Gabart took position on the hill of Charrier with Benjamin Noel. The fighting redoubled and the evening, 1,200 French soldiers were killed or wounded [1,200 dead and 2,000 wounded on the Haitian side].

The next day a French officer, Duveyrier, go to the sentinel of Capois and was taken to the Headquarters of the Haitian army. Talks with Dessalines lasted a full day and before nightfall, an agreement was signed. Rochambeau got ten days to evacuate the fort of Vertières and embark the remains of his army and leave Santo Domingo.

Following this victory, Haiti’s independence was officially proclaimed on 1 January 1804 became the first black republic in the world.”

Read more about the history here and here

You wanna save time walking around grocery shops?

According to our readers, the Rara band and Haitia

Summer is right around the Corner👙🌞⛱️⁠

We were at the Ft.Lauderdale protest earlier today

#LSuiteHaitianTikToks⁠ The freestyle at the end

#LSuiteHaitianTikToks⁠ Haitian parents are the b

Our team joined hundreds of people at Huizinga Pla 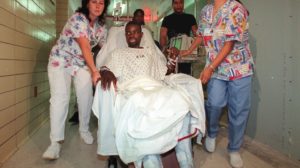