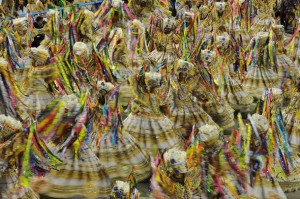 Revellers of the Beija Flor samba school perform at the Sambadrome during the first night of Rio de Janeiro’s famed carnival parades on February 20, 2012. The night parades in Rio’s hallowed Sambadrome marked the high point of the pre-Lent bacchanalian Carnival festival, which is bringing this racially diverse country of 191 million people, virtually to a stop. AFP PHOTO / VANDERLEI ALMEIDA (Photo credit should read VANDERLEI ALMEIDA/AFP/Getty Images)

Fam, do not listen to this man and get yourself in

Actress Garcelle Beauvais who returned for the Com

March is #Women's History Month, and it commemorat