PIH was founded in Haiti more than 30 years ago and is known in Haiti as Zanmi Lasante. The team opened University Hospital in Mirebalais in 2013, in collaboration with Haiti’s Ministry of Health. The 300-bed teaching hospital is home to residency programs in internal and family medicine, pediatrics, surgery, obstetrics and gynecology, neurology, nurse anesthetists, and emergency medicine.

ACGME-I, the international arm of the U.S.-based Accreditation Council for Graduate Medical Education, notified PIH of the institution’s accreditation this week, after a multi-year process and extensive analysis by its International Review Committee. University Hospital joins internationally accredited facilities in just seven other countries and is the second such facility in the Western Hemisphere, along with the University of Panama.

Toussaint noted that the accreditation application was due in September, during the height of recent political unrest in Haiti that essentially shut down the country.

“Despite all of that, we have been able to meet the standards,” he said. “PIH is committed to meeting the standards that everyone is meeting around the world.”

Dr. Edward Hundert, dean for medical education at Harvard Medical School and an advisor to PIH, praised the milestone.

“This achievement, of the internationally recognized highest standard for the educational programs at University Hospital, represents a truly wonderful validation of the years of hard work to build these programs, and of the outstanding quality of training that they represent,” he said. “This is exciting news not just for the hospital and the people who made it happen, but ultimately for all of the patients who will be cared for by the clinicians who train in these now ACGME-I accredited programs.”

Since the start of its medical education programs, Zanmi Lasante has graduated 123 residents, 98 percent of whom have remained to work in Haiti, including 58 percent at facilities supported by Zanmi Lasante. Another 116 residents are currently enrolled.

ACGME-I provides accreditation services to graduate medical education programs and institutions outside the U.S., to improve health care in the countries it serves. Within the U.S., ACGME is the accrediting body for the vast majority of teaching hospitals.

The accreditation comes during an emotional time in Haiti, which just marked the 10th year since the devastating earthquake of Jan. 12, 2010. University Hospital was built as a response to the earthquake and has since transformed health care for more than 1 million people across Haiti’s Central Plateau. 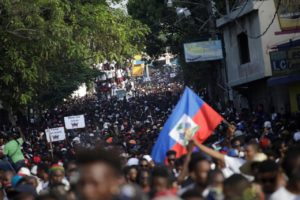 #Breaking According to various reports, the Police

Ministry Of Tourism Haiti shares a clip of Jacmel