Nationality: Haitian
Languages: French (official), Creole (official)
Ethnicity: Black (95%) Mulatto and White (5%) notes: Haitian constitution specifies:
( All Citizens must be known as “Black” regardless of skin color)
Religion: Roman Catholic (official) 54.7%, Protestant 28.5% (Baptist 15.4%, Pentecostal 7.9%, Adventist 3%, Methodist 1.5%, other .7%), voodoo (official) 2.1%, other 4.6%, none 10.2%
note: many Haitians practice elements of voodoo in addition to another religion, most often Roman Catholicism; voodoo was recognized as an official religion in 2003

Adopted on February 26, 1986, the national flag of Haiti is divided in two equal horizontal bands of blue (top) and red with a centered white rectangle bearing the coat of arms, which contains a palm tree flanked by flags and two cannons above a scroll bearing the motto L’UNION FAIT LA FORCE (Union Makes Strength); the colors are taken from the French Tricolor and represent the union of blacks and mulattoes.

The coat of arms features a palm tree, topped with the Phyrgian cap, a symbol of liberty, and surrounded by six Haitian flags. The tree is flanked by cannons, and between them are several objects, including a drum and bugles, and a broken chain. Across the bottom of the coat of arms is a banner that reads “L’Union Fait La Force,” which means “Unity is Strength.”

The colors of the Haitian flag  reflect Haiti’s status as a former French colony, using the red and blue from the French flag. The story behind this resemblance is that the revolutionary Jean-Jacques Dessalines created the flag from the French flag, removing the white center and rotating the stripes, the blue and red left to represent Haitians, symbolically removing any remnants of white influence. The blue represented the former slaves and the red represented the mulatto population, who are people of mixed black and white ancestry.  The flag first came into use in 1806, and was made official by the national constitution on February 25, 2012.

La Dessalinienne is the national anthem of Haiti, honoring Jean-Jacques Dessalines. It was written by Justin Lhérisson and composed by Nicolas Geffrard in French and adopted in 1904. Haitians who have been to school are more likely to know the first and last stanzas. The others (especially the fourth one) are rarely sung.

A Haitian, or Haitian people (Kreyòl: Ayisyen) are the inhabitants or citizens of Haiti. Haiti is a multi-ethnic nation, home to people of different ethnic and national backgrounds from West Central region of Africa, Polish, Jews (during the Holocaust), French and Taino Indian influences who are native to the country of Haiti, in the west of the island of Hispaniola.

Creole and French in Haiti : Haitian Creole is the true national language of the Republic of Haiti.  In addition to seven million people in the homeland, it is spoken by about a million Haitians living abroad. All Haitians speak the language, but a small minority of about 10% of the population also speak French, which they have learned either at home or at school.  However, even Haitians who master French consider Haitian Creole, which they use for most everyday communication, as the symbol of their national identity. –read more 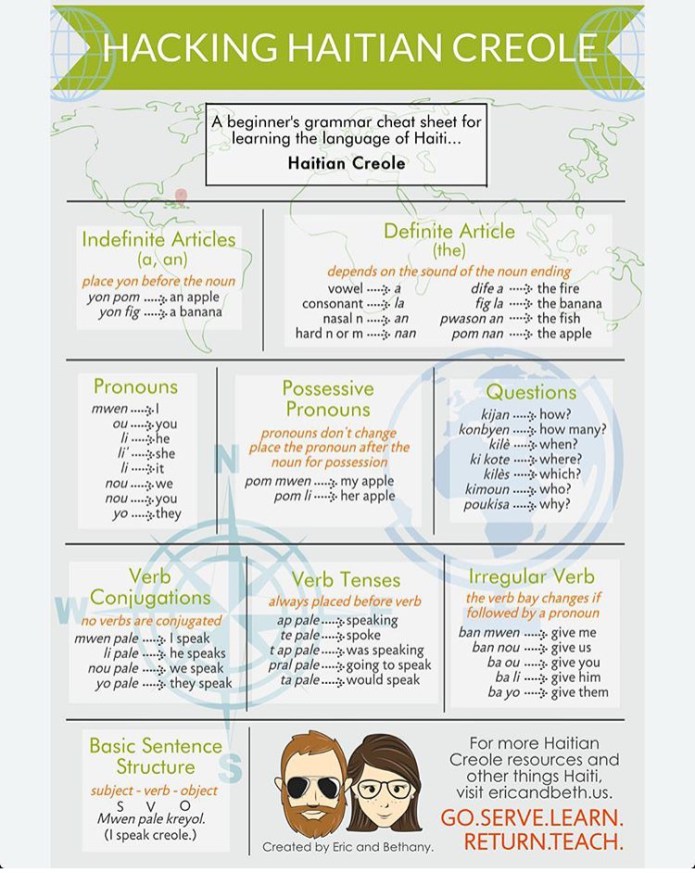 To read about facts about Haiti, Click Here  and Here