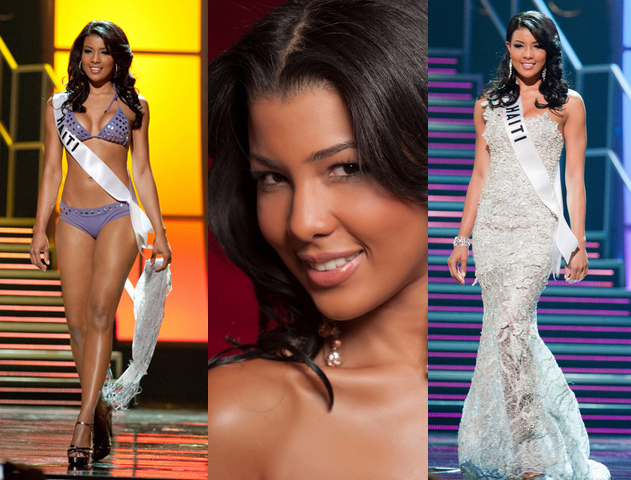 Sarodj Bertin Durocher is a Haitian lawyer, best known as a beauty pageant contestant. Bertin was born in Haiti, and is the daughter of Mireille Durocher and Jean Bertin. Bertin’s mother, who was a lawyer and an outspoken critic of then president Jean-Bertrand Aristide, was murdered on March 28, 1995 in Port-au-Prince. After her mother’s murder, she was sent to live in the Dominican Republic.

After the 2010 Haiti Earthquake, Bertin entered the Miss Haiti Universe contest and won. She represented Haiti in the Miss Universe 2010 beauty pageant held in Las Vegas on August 23, 2010. Bertin believed that competing in Miss Universe would give the people of Haiti a voice, stating, “there are many people who want to help but don’t know how and sometimes they need a voice to tell them what are the necessities of the people. I want the people, through me, to be who says what their necessities are.” On 25 October 2012, she won the Reina Hispanoamericana 2012 pageant.

Since the deadline for Haitians to register with immigration authorities passed on June 17th, many Haitians turned to Sarodj’s social networks asking her for her opinion and requesting that she speak up for Haitians. Sarodj who’s been pretty vocal against posting anything about the matter on her instagram agreed to do a quick interview with me where she explained her position on the Haitian-Dominican deportations.

Do you live in Haiti or The Dominican Republic?

You put 200% Haitian on your instagram page, is there a story behind the reason you  over specify your Haitian descent?

I put 200%Haitian because that is how I feel, I have always represented Haiti, and sometimes people create stories about my background saying I am half Dominican, or that my parents are Dominicans, and it’s not true, I am all Haitian, and only Haitian.

Since the deadline  to register with immigration authorities in the DR passed, what have it been like living in the Dominican Republic?

A lot of immigrants in Dominican Republic are in a difficult situation because they don’t know what to do since they didn’t  get everything they needed to register on the “plan de regularisation”. Part of the Haitians (almost 25,000) immigrants have decided to go back to Haiti on their own and others are expecting to get an extension of the deadline. The deportations haven’t started, but the Dominican Government said they will not be doing a massive deportation.

What is it like being a public figure of both descent with everything going on right now?

I am not of  both decent, I am only HAITIAN.  I am a public figure who works in Dominican Republic.

I respect all kind of opinion, but I believe most of the people who are protesting in the States do not really know the situation. I’ve seen a lot of people attacking the Dominican Republic and showing old videos as if they are happening now. The situation between Dominican Republic and Haiti has a solution, and it has to be negotiated between both governments, respecting they countries and the people.

What are you views on the conflict and division between some Haitians and Dominicans due to the passing of this law?

In your opinion, what do you think can be done by both Governments to alleviate the problem?

I think the Haitian government should have renegotiate with the Dominican Government before the deadline, when we wait for the last moment a lot of doors get closed. I think both governments have to maintain communication about how and what they want to do, so they can always respect the integrity of the people.

Are you involved in helping any of the Haitian-Dominicans being deported right now?

As I told you before they are not being deported.  If they have an illegal status eventually they will be, but right now, the Haitians who’ve been going back to Haiti are the ones who’ve decided to. I am trying to help the ones who got registered in the plan, but don’t have all their documents yet so they’ll understand the next steps to get all of their documents.

You mentioned on instagram you are involved with charities and give back to Haiti.

My foundation name is Sarodj for a Purpose and I work with orphans in Haiti. I have been helping 105 orphans for more than 5 years, with education, food, school supplies, toys, clothing etc. I am working to build a technical school in Haiti for those kids, and other orphans in the country.

Is there a reason you haven’t posted anything on your social networks to bring awareness to whats going on?

People are asking me to post, but most of the things they’re asking me to post are not the things I see here. I can’t post something because someone wants me to. I usually don’t use my instagram for politics, but I do use it for charity. I don’t think Dominicans and Haitians have anything against each other, I believe its normal to have immigration problems when you share a border.

How do you feel about the people who are saying you should be more vocal and bring awareness to the people being deported since you’re considered a representative for Haiti?

The people saying that don’t know how many times I’ve spoken about it, they just want me to post something on instagram, and my decision it’s not to do so. I give all the interviews, and answer all the questions, that is being vocal for me.