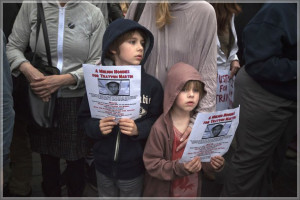 Boys hold images of slain Florida teen Trayvon Martin while standing amid the arms of their mother, at a protest called A Million Hoodies March, to demand justice for Martin’s killing in New York’s Union Square March 21, 2012. Martin, 17, wore a hooded sweatshirt when he was killed last month in a gated community in Sanford, Florida, by neighborhood watch volunteer George Zimmerman. The incident has drawn national attention and sparked debate over Florida’s “Stand Your Ground” law since Zimmerman, 28, has claimed self-defense in the fatal shooting. The police have declined to arrest him. REUTERS/Adrees Latif (United States – Tags: CIVIL UNREST CRIME LAW)