Two years ago we reported Naomi Osaka saying Serena Williams was her favorite player and idol, so how did Osaka react to beating her idol at the Miami Open on Wednesday, she tweeted ‘Omg.’

Fresh from winning the first title of her career at Indian Wells on Sunday. Naomi Osaka defeated 23-times grand slam singles champion Serena Williams 6-3, 6-2 in the Miami Open first round on Wednesday, the latest big win for the emerging 20-year-old Haitian-Japanese player.

Still rusty in her return from pregnancy, Williams was unable to overcome a tough opening draw and lost to Osaka.Osaka displayed memorable poise taking 77 minutes to defeat Williams. Her powerful serve and relentless returning proved too much for Williams who was broken at 3-3 and 5-3 in the first set and again at 3-1 in the second.

Osaka clinched victory with an ugly unforced error by Williams, who hit a wide open forehand long to send Osaka into the second round, where she will face world No4 Elina Svitolina of Ukraine.

The winning continues for @Naomi_Osaka_!

The 36-year-old Williams, playing her fourth match since the birth of her first child in September, is still working her way into form and although she showed her trademark power, she struggled to move smoothly around the court. Osaka said she was nervous at the start playing her idol for the first time but her goal was to avoid Williams winning 6-0, 6-0.

“She’s the main reason I started playing tennis,” Osaka said. “I just wanted her after the match to know who I am.”

Mission accomplished. If Williams didn’t know who Naomi Osaka was, she does now. When asked about how nothing seemed to faze her, not even Williams, Osaka replied:

“No, I was extremely nervous coming on to the court. I don’t know if anybody knows this, but Serena’s my favorite players. Just playing against her is kind of like a dream for me, so I’m very grateful that I was able to play her and it’s even better that I was able to win.”

When asked how she was able to focus on playing great tennis and not on the legend on the other side of the net, she said:

“I’m not really sure. I just kind of wanted to impress her, and I just wanted to make her say, ‘Come on!’ one time, and I think she did, so I’m really happy about that.”

“I don’t know if you guys know this, but Serena’s my favorite player.” #MiamiOpen

Osaka who has become known for her delightful interviews was humble after beating Williams, and her reaction on Twitter was perfect. She tweeted a photo of her and Williams shaking hands after the match with the simple caption of “Omg.” 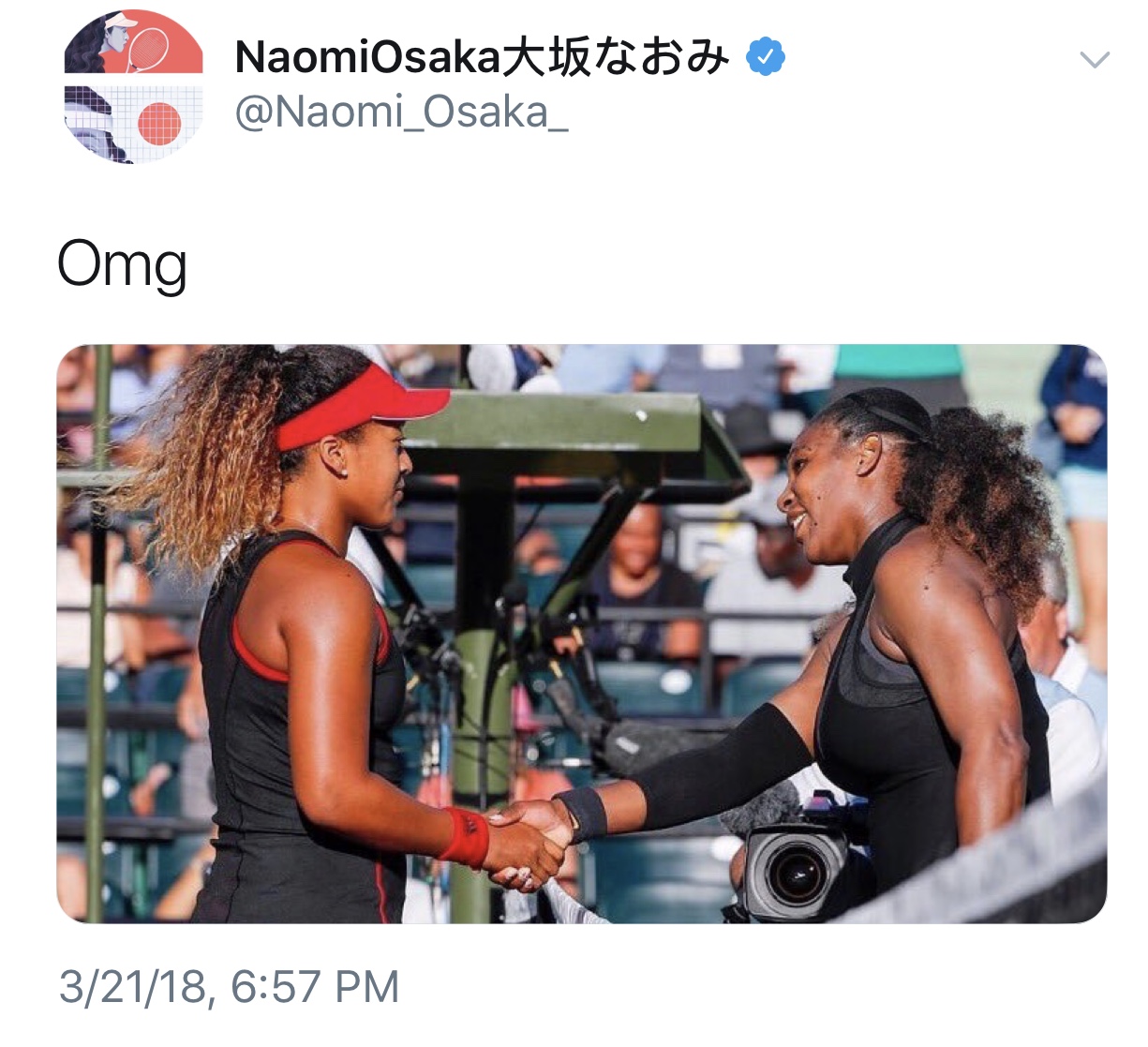 While Williams was smiling after the loss, as you can see in the photo of her shaking Osaka’s hand, she skipped a mandatory post-match news conference. It is uncommon for players, including Williams, to skip such duties after a match, Williams could face a fine for her absence.

Osaka is 14-4 this year and will next face No. 4-seeded Elina Svitolina as the tournament’s new player to beat.