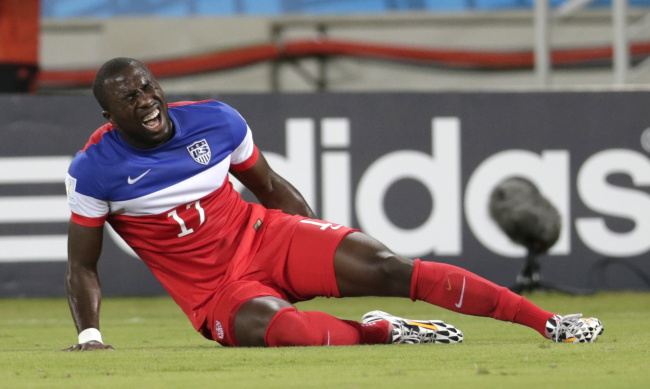 Speedy recovery Jozy, we miss seeing you on the field and the US Team needs you.

Jozy Altidore will miss the United States’ World Cup game against Germany on Thursday because of his strained left hamstring.The forward was injured in the Americans’ opening 2-1 win against Ghana on June 16 and didn’t play in Sunday’s 2-2 draw against Portugal.

“Jozy is recovering really well,” U.S. coach Jurgen Klinsmann said Tuesday. “This game comes still too early for him. But we’re working on him. We’ll get him back in this tournament, as we said, so once this game hopefully is done successfully, we’ll have a good chance to have him back then in the team.”

Germany has four points and leads Group G on goal difference over the United States. Portugal and Ghana, who also play Thursday, have one point apiece.Defender Matt Besler said he felt pain in his right hamstring when he stretched during a clearance Sunday but said it was less painful than during the opener, when he came out at halftime.

“Matt Besler is no problem at all,” Klinsmann said.