I am praying everything is okay and Noel isnt as hurt as it appears. I’ve been following and rooting for him since I found out about him last year and I pray this is not the end for such a talented ball player.

Kentucky may have lost more than just a basketball game on Tuesday night. The No. 25 Wildcats also may be without freshman forward Nerlens Noel for a significant length of time because of a left knee injury he suffered during the second half of their 69-52 loss to No. 7 Florida. The 6-foot-10 Noel landed awkwardly on his left knee and then slammed the knee into the basket support after chasing down Mike Rosario on a fast break and blocking the shot with 8:03 left

“I didn’t see much,” Kentucky coach John Calipari said. “They said it looked ugly, so I don’t know. We’ll have to see.” Noel left the O’Connell Center in a wheelchair. The school said in a statement that Noel would fly back to Lexington, Ky., with the rest of the team Tuesday night. “His leg was wobbly, knee looked dislocated,” Florida center Patric Young told the Palm Beach Post. “It was gruesome. I don’t want to think about it.” Noel immediately grabbed his left knee and screamed in pain. Trainers immediately rushed to his side and Calipari eventually came over and stayed with Noel until he was carried off the court by several teammates.

“He was yelling and screaming, so that’s why I stayed [with him on the floor],” Calipari said. “But it’s unfortunate and I just hope and pray that he’s OK, but we’re going to see.” Losing Noel would be a blow to the Wildcats (17-7, 8-3 SEC), who now trail No. 7 Florida (20-3, 10-1) by two games in the SEC standings. Noel leads the nation in blocked shots (4.5 per game) and averages 10.6 points per game and is second in the SEC in rebounding (9.6 per game). Kentucky had been threatening to cut Florida’s lead to single digits before Noel was hurt, but the Wildcats didn’t score for nearly four minutes after his injury.

“Obviously, he’s a big part of our team so to see him go down is a reminder [of how important he is],” Kentucky guard Julius Mays said. “It hurts us because he is a big guy and he makes the game different.”

Calipari said he did not want to speculate about the injury or any possible recovery period. “I’m physically sick right now,” Calipari said. “What I’m hoping is it’s not the extreme. I’m hoping it’s some sort of twist but we don’t know.” 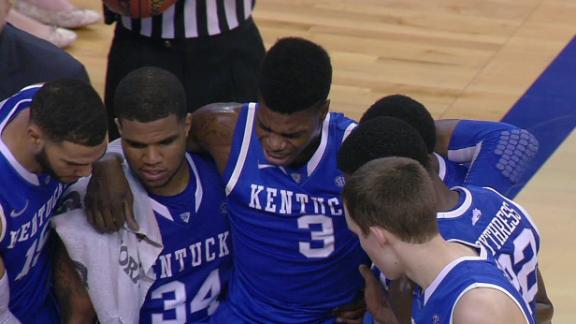