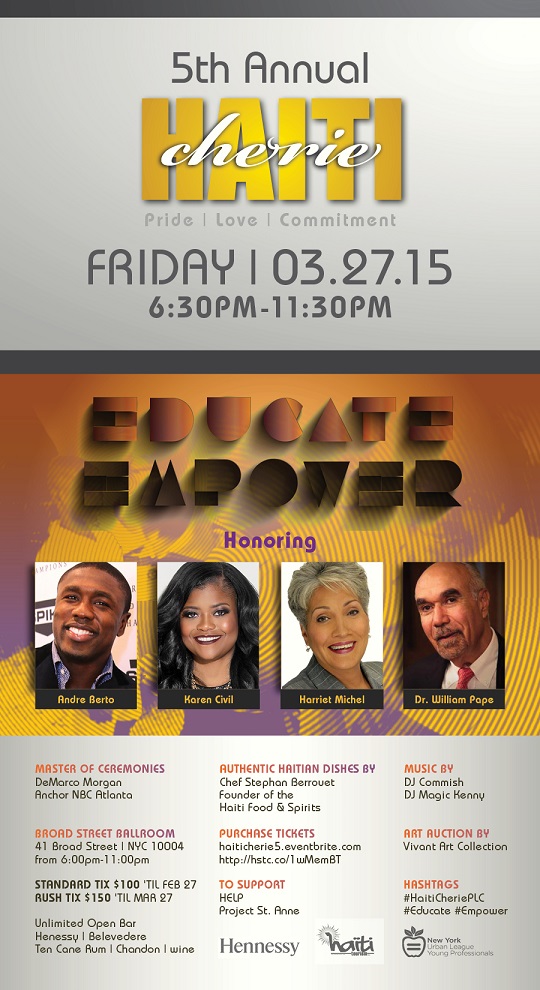 On Friday, March 27th, the 5th annual Haiti Cherie charity event will bring together hundreds to raise funds for local nonprofit organizations in Haiti still working to recover from the 2010 earthquake that killed an estimated 300,000 people. The event will honor the accomplishments of Haitian professionals, who have excelled in their fields, and serve as a reminder of Haitian pride, culture and resilience.

Haiti Cherie is the brainchild of Fabrice J. Armand, a philanthropist, producer, vice president of GCaribbean magazine, to raise funds for charities creating sustainable change in his native Haiti. The event was first launched in 2010 following the devastating earthquake in Haiti and has continued to maintain support for the reconstruction of the country. The event honors professionals who have excelled in their fields have been supporters of Haiti. Past honorees of Haiti Cherie include Ambassador Paul Altidor, Haiti’s Ambassador to the U.S.; Ralph Giles, President of SRT Department and Senior Vice President of Chrysler; Dr. Jean Orelien, CEO of Scimetrika; Jimmy Jean-Louis, NBC Heroes; Mona Scott-Young, Founder of Monami Ent; Katleen Kelix, Fonkoze; Rodney Leon, Principal of Rodney Leon Architects; Judge Lionel Jean-Baptiste, Chicago Circuit Court Judge; Mathieu Eugene, NYC City Council; Wallace Ford, Former Commissioner of Ports and Trade and President of Fordworks.

According to Fabrice Armand, founder of Haiti Cherie, the event has become a unifying moment for the Haitian diaspora and friends of Haiti in New York City. The event is attended by people from across the US, Haiti, France and Canada. “Haiti Cherie is not just about raising funds for worthy charities back home,” said Armand. “It is also about bringing the Haitian community together and raising awareness of Haiti’s significance in history and its beauty and richness as a culture and a nation.

Proceeds generated by the Haiti Cherie fundraiser will be distributed to, and utilized in, furthering the efforts of HELP and Project St. Anne to provide life-changing support and educational opportunities to the less fortunate in Haiti. HELP (www.uhelp.net) provides university scholarships to students from disadvantaged backgrounds. The organization also aims to cultivate and empower a community of young professionals and leaders who support social justice and civic responsibility for the betterment of Haiti. Project St. Anne (http://projectstanne.org) is committed to brightening the lives of the Children in Camp-Perrin by sponsoring them with the vital need of an education.

The event will also feature a live performance by Haitian International artist Wanito and Belinda Munro. Guests will also have the opportunity of enjoying the intoxicating sounds of DJ Commish and Magic Kenny.