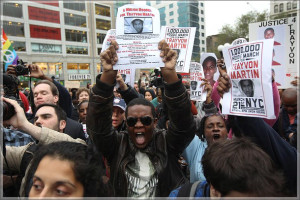 NEW YORK, NY – MARCH 21: Demonstrators chant at the Million Hoodies March on March 21, 2012 in New York City. Hundreds of protesters marched from Manhattan’s Union Square, calling for justice in the killing of Trayvon Martin, 17, who was was pursued and shot on February 26 in Sanford, Florida by “neighborhood watch” member George Zimmerman, reportedly because the teenager’s hoodie made him look suspicious. Under Florida’s “Stand Your Ground” law, Zimmerman has not been charged with a crime in the shooting. (Photo by John Moore/Getty Images)

#HaitianOwned🇭🇹⁠⁠ You know what time it

#LetsTalkAboutIt 🇭🇹 ⁠ Keep it going in the

Energy on Haitian women are everything! 🔥 🎥

George Floyd's family reacts to the conviction of

What would you do? 😅😑⁠ 🎥 @stevesjbryan