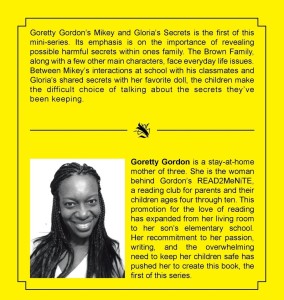 L’union Suite had a chance to interview Haitian-American author Goretty Gordon, whose latest book is about teaching children how to  reveal their secrets with their parent.

The book titled ” Mikey and Gloria’s Secrets”  is the first of this mini-series, Its emphasis is on the importance of revealing possible harmful secrets within ones family. Between Mikey’s interactions at school with his classmates and Gloria’s shared secrets with her favorite doll, the children make the difficult choice of talking about the secrets they’ve been keeping.

Hi Goretty, thank you for agreeing to this interview. Tell us a little about yourself and your background?

My name is Goretty Gordon. I am a blessed Haitian woman, married to a wonderful Jamaican man, mother of 3 young spectacular children and author of “Mikey and Gloria’s Secrets”, 1st of the Secrets series. I was brought up in Boston, MA but have lived in South FL for over a decade now. I grew up watching my mother work all the time. My dad worked as well. Our job as children was to go to school and do our homework.

Reading was always encouraged. I developed a love for reading and writing early on but never truly realized what effect I could have on people who read what I wrote. When I moved to South FL I never intended to write, although my actions proved otherwise. I worked many jobs and many times if I had the opportunity, at lunch time let’s say it wasn’t uncommon to find me writing the time away.

Eventually I found less and less time to write. It wasn’t until recently when my past and present seemed to come full circle that I found myself being pushed back into my writing. I was in a state of many emotions and internal conflicts. I honestly believe God reconnected me with my passion for writing as a means to not only tighten my bond with my children, who inspire me daily, but also as a source of escape.

Was that your influence to start writing this book?

During the time I started writing this first story I had come to realize how I was failing when it came down to reading to my kids. I had the ideal picture in my head of what it would be like as a stay at home mom and being able to read and do projects constantly with them; because hey I grew up with Haitian parents and what’s that saying “aller chercher un livre” I loved to read and write so that part was going to be easy, so I thought. No one ever told me after becoming a gross ‘v’ word, victim, that staying at home with your children would be like an all day, every day endless buffet of worries, thoughts, and scenarios playing over and over in your head.

I started a reading group called Gordon’s READ2MeNiTE for kids ages 4-over. The reading group helped to hold all who decided to attend and I a little more accountable for reading to and with their children. I figured I couldn’t be the only one having a hard time committing to reading to their child. So I would help other parents by encouraging them to come with their kids and every other week I held group.

When the group started, Mikey and Gloria’s Secrets was already in the process of being published. It wasn’t uncommon for me to jot things down from time to time, but it had been a long time since I had been engrossed. When I decided to write this story for my children I had no idea what the content would be. I was looking to bond, nothing more. When my story was finished and I finally named characters within it, I knew. This was a story other kids, all kids should have access to as well.

The love and fears that a loving mother has for her children is unmeasurable. In my process, I had to make my faith that my children would be safe, grow even more than those fears. Fear of someone hurting them when I wasn’t looking. Fear that they would be hurt right under my nose. Fear that I would miss something that would change their lives forever. Yes my faith had to grow but my commitment to doing my part in preventing those fears I decided would grow as well. As I said I wasn’t reading enough to my babies, something that should of came so easy to me so I started the reading group for all the kids that came.

When I wrote the story it was clear that it was a story meant for all children as well. So there it is. I’ve been through it, am going through it, and want to help not just myself and my own but all whom can take something away from my writing. It takes a village to raise a child but that village has to be willing. I’m willing so if writing is a renewed passion it’s only fitting I write for my children, for your children, for all children and promote their safety and well-being. Even if I do pursue other genres in the future, writing for kids to encourage them to speak out on things that may harm them is too important for me to ever just stop. 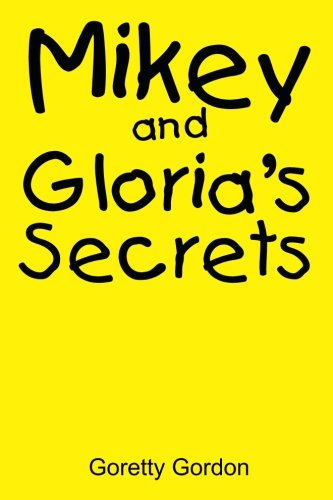 How did you come up with the title?

Mikey and Gloria’s Secret was written before characters were named and before a title was given. The story is about the secrets of the main characters so the title came easily when it was done. As a mom, when I decided to write a story for my children, I obviously wanted to incorporate them in that story.

After reading and rereading I was fine naming one of the main characters after my son but Gloria was more difficult. As a mommy, I couldn’t bring myself to put my daughter in the shoes of Gloria. When my daughter questioned why she wasn’t in the title, I promised to give the character that was named after her more of a story line next time around. She was happy with that answer.

What was your favorite chapter (or part) to write and why?

My favorite part in Mikey and Gloria’s Secrets would be in Chapter 3 when Mrs. Brown gets down to the children’s level of thinking and asks Dolly, Gloria’s favorite doll, to reveal what secrets the children had been keeping. It reminds us that children even when they are being strong little people are just that, children.

We as adults with the bills and the pains of yesterday forget sometimes what it was like to be carefree children, silly children, and sad children, frighten children. Sometimes to get the answers we desperately need to actually hear them say, it’s necessary to get down to their level.

Can you tell us about any our upcoming books?

Secrets of Friends is actually the next story in this Secrets series. It is available now on amazon as well. In this story the characters have grown and dealt with more challenges. The children are faced with dealing with some harsh realities of their peers. More secrets are revealed and more lessons learned. I am actually working on the third book for the series now. So watch for more secrets to come.

What has been the toughest and best criticism given to you as an author?

My toughest criticism was and is from me. When I first decided I would publish these books I was really nervous about the content. The message had to be clear and come across more or less black and white for the readers so that it was obvious what was wrong with certain situations but also I had to make sure it was kid friendly enough for my target audience. Even after the first person to read my manuscript, the vice principal at my son’s school, gave it a ‘double thumbs up’, I was still very nervous about the different subject matters.

My best compliment was from my oldest son actually. We had our Gordon’s READ2MeNiTE group meeting and I overheard him tell one of the boys there his mommy was an author. It just so happen that his class had been learning about the body of books that week. The boy replied, “nu-uhh, she’s the cleaning lady” I don’t know where he got that idea, maybe because my home was clean lol, but my son said, “no she’s an author and this is the book she’s working on” and he pointed to a display board I had up. He was just so proud, grinning from ear to ear. I had told him I was writing a book and to know they got to witness the process and have them be proud of me. That was the best compliment.

What advice would you give to your younger self?

The advice I would give to my younger self is learn to value you for you a whole lot sooner and hold your mom a little tighter. I never honestly began to love and understand me for me until most recently and my mom, my mom is deceased. It happened when she was 47, I had just turned 21. Both pieces of advice are connected and well, that’s a story all on its own.

Is there anything that you would like to say to your readers and fans?

To my readers, I want to say it’s ok. You are not alone. Our eyes are open to the unseen. Our ears are listening to the silence. If someone is hurting you, maybe you’re being touched or hit. When it comes to secrets like those, talk about it.

L’union Suite readers, Goretty would like to offer the first 100 books sold through the site at a flat rate of $10. To order the book, don’t purchase it through Amazon, request the book via email  (gorettygordon@gmail.com) with the subject Lunionsuite and Goretty will contact you.

Here is a video from Goretty’s Youtube page of her and her daughter singing the song “Don’t Touch That Spot.”