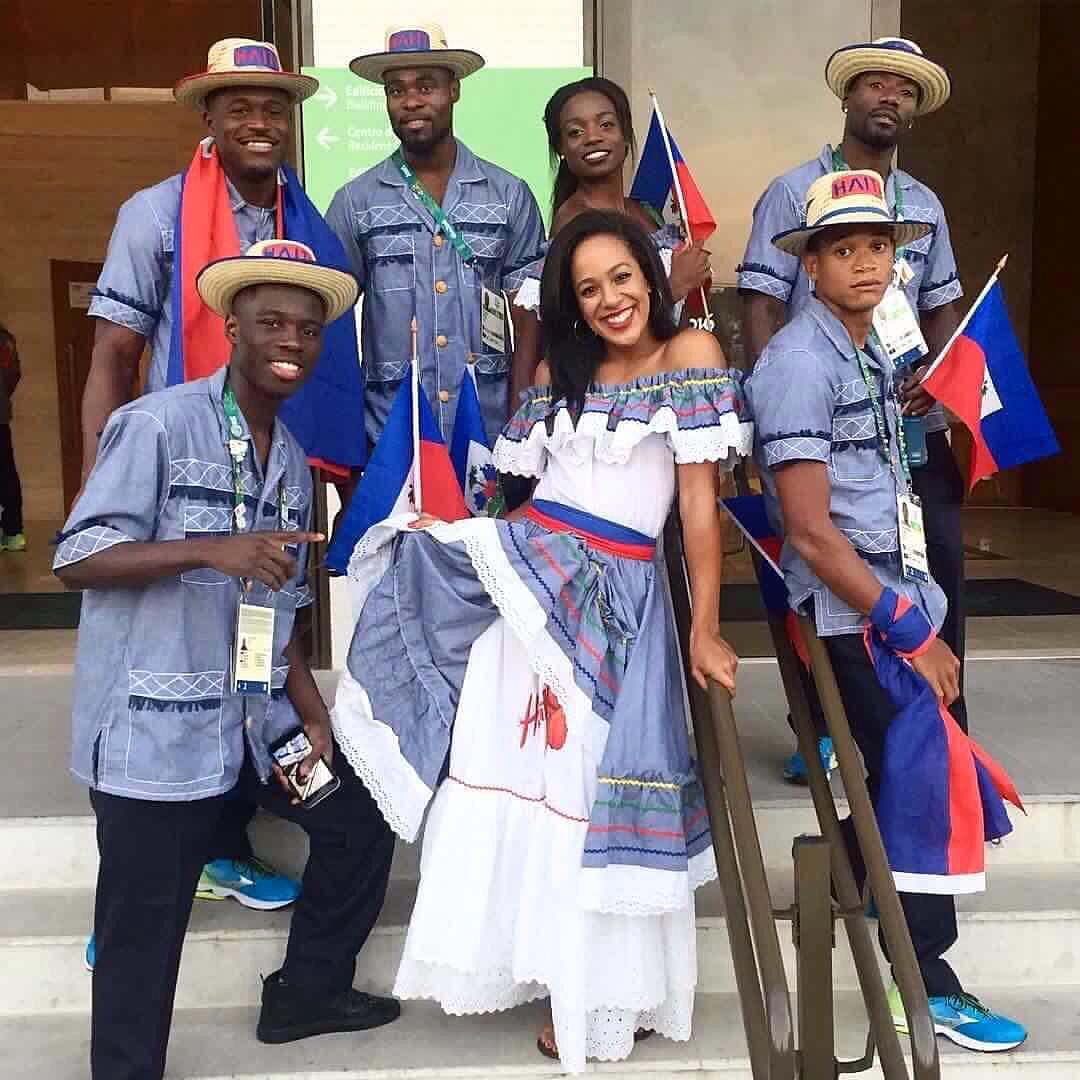 As per traditional protocol, the ceremony featured cultural presentations from Brazil and Japan, as well as closing remarks by International Olympic Committee President Thomas Bach and the leader of the Games’ organizing committee Carlos Arthur Nuzman, the official handover of the Olympic flag from Rio de Janeiro mayor Eduardo Paes to Tokyo governor Yuriko Koike, whose city will play host to the 2020 Summer Olympics, and the extinguishing of the Olympic flame.

If you followed our social networks, we posted daily updates and results of all our Haitian Olympic athlete but we wanted to provide a complete list of results for all 10 of our athletes in one place. Here are the results from Haiti’s 16th participation in the Olympics since 1924.

Wrestler Asnage Castelly 1.82m for 74kg and flag bearer of the Haitian delegation to the Olympics opening, faced in a combat the Iranian Hassan Aliazam Yazdanicharati 1.81m for 74kg, during the 1/8 Finals/Repechage Round 1 of the Men’s Freestyle 74 kg.

Castelly qualified and advanced to the quarterfinal once his opponent Hassan Yazdani Cherati advanced.

Later in the same day. Castelly  faced Turkish wrestler Soner Demirtas and after a few minutes of combat, the Haitian Olympian was defeated in Great Superiority 12-0.

Asnage Castelly is the first Haitian to represent Haiti in wrestling and also made also by qualifying and competing in the quarterfinal.

Sentinel.ht reports, Haiti’s 17-year old, Aniya Necol Louissaint (red), had the odds stacked against her. For one, the high school junior seemed to, only by chance, find herself selected by the Olympic committee to be featured on the world stage for the first time in Rio. Her first fight was against the number 1 taekwondo fighter in the world, the reigning World and European Gold Medalist Haby Niaré (blue) of France.Louissaint left fight fans and commentators mouth gaped as she nearly beat Niare. She ended up losing 4-5 and nearly won if she hadn’t missed a last-second round house to the head by just inches.

Aniya Necol Louissaint’s earned an opportunity to still keep her Olympic medal dreams alive with a second fight against the Ivory Coast’s Ruth Marie Christelle Gbagbi. By winning that match and two other subsequent fights, she would have taken home a Bronze medal for Haiti. Louissaint lost to Gbabi 7-2. 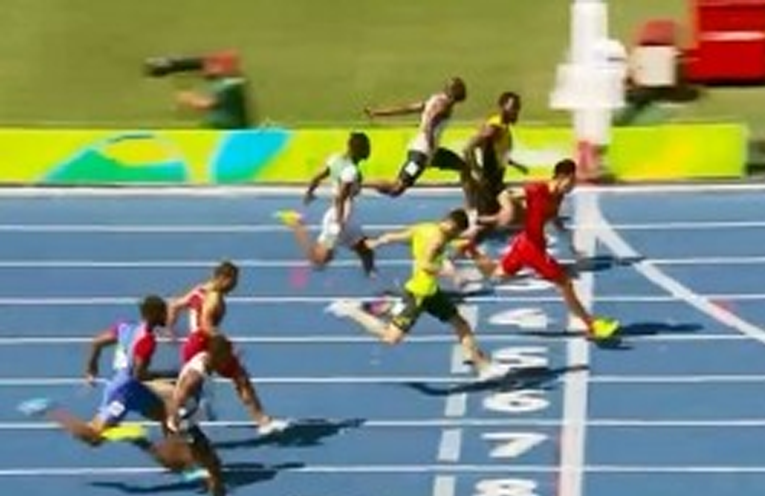 Haitian sprinter Darrell Wesh participated in the first round of the men’s 100 meters. The competition consisted of 8 heats of 8-9 runners hoping to qualify to the semi -finals.  Darrell Wesh was in the 3rd heat  and placed 8th in his heat with a time of 10.39 seconds ( Chinese Zhenye Wie with a time of 10.08 came in first in his heat ) Darell did not qualify and ranked 54th out of 69 runners. Unfortunately for Darrell , competition, and the Olympic experience ended there.

Loop Haiti reports, The reality of international high-level competition is cruel for some athletes. For reasons that remain to be clarified , the Haitian weightlifter Edward Joseph , 26, was eliminated from the competition.  Just a few minutes of Riocentro Pavilion 2 , the Haitian had experienced great difficulties in the 62 kg category. Edward passed its first test in extremis with a weight of 102 kg , and its second at 107 kilograms. On his third attempt , he tried to lift 112 kg , but it failed , ending this wave with a score of 107. Edward Joseph failed to participate in the wave of the shoulder jerk ending its Olympic competition. The next competitor to which an athlete of the Haitian team is scheduled to attend next Wednesday.

Haitian Swimmer Frantz Dorsainvil who dreamed of bringing an Olympic medal to Haiti at the 2016 Summer Olympics in Rio de Janeiro Brazil was eliminated. Frantz competed in the Men’s 50m freestyle. There were 11 heats and Frantz placed 6th in his heat and finished 84th out of 85 athletes. 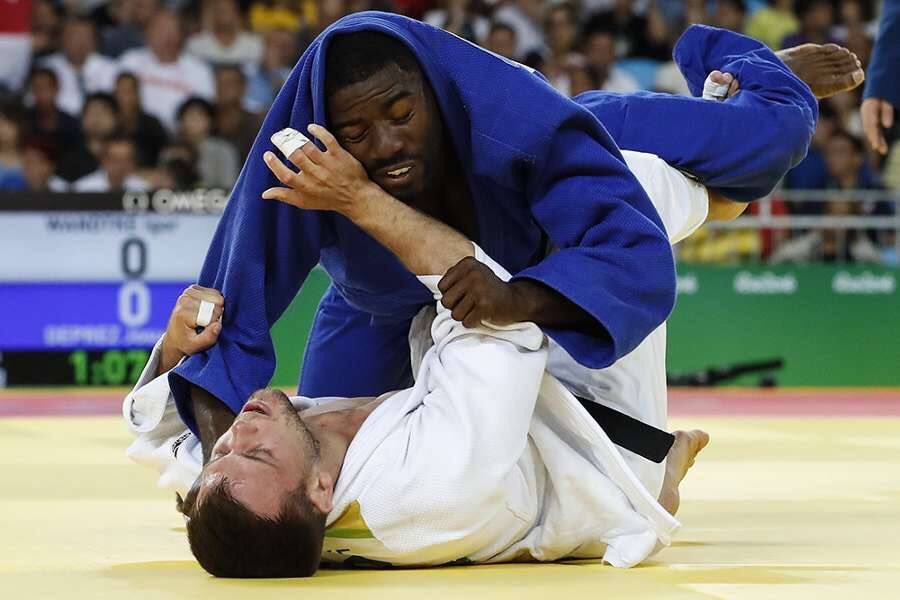 Josue Deprez, 34, (73 kg)  was eliminated in the semifinals by the German Igor Wandtke after five minutes of fighting. The Haitian Olympian was penalized one Shido (warning for slight negligence) by the arbitrators and lost a duel. Overall the game was zero, but the fact that the German had no Shido, he was declared the winner. After the duel, coach Variotho Tibert, former judoka said that Joshua was a victim of lack of preparation because it has made all the strategies to win the game. “He was not stressed. He had all the strategies to combat his opponent. But he was the victim of lack of preparation. This is why he could not develop all his reflexes. These are the training that allows athletes to win this kind of game “, said the coach Variotho while announcing that it is the last international competition of the veteran Josue Deprez.

“It’s hard for him because it’s his last international competition. Now let’s get to work to prepare a new generation of judo, “he informed while noting that it is finalizing a work plan to enable the judo to resume his place in sports Haitian.

Josue Deprez thanked all those who supported while asking for forgiveness because he has not had the opportunity to bring the medal as expected by the people of Haiti. The Olympian said that his performance against the German Igor is “an open door to the next generation because the Germans did not expect such opposition. It took a penalty for them (Germans) enable to win the game. That was my last meeting for Haiti. “ 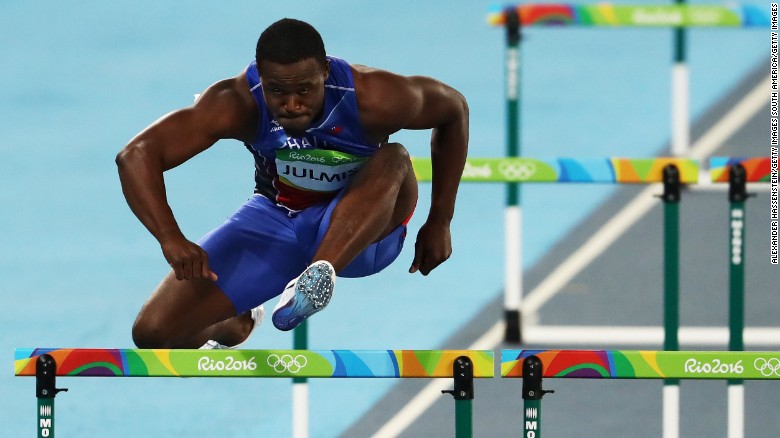 Jeffrey Julmis placed 3rd and moved on to semifinals with a time of 13.66. The following day, competing in the semifinals of the men’s 110-meter hurdles, the 28-year-old took a nasty tumble as he ran through the first hurdle disappointment for Julmis, who was competing in his second Olympics and has yet to reach a final but instead og giving up for what was an embarrassing moment for him, in true Olympic spirit, he got up again to finish the race to huge cheers from the crowd. Julmis finished in a time of 25.56 seconds, 13 seconds behind race winner Orlando Ortega of Spain but was disqualified for going under instead of over one of the hurdles.

As unfortunate as the race,  Julmis’s Rio 2016 moment didn’t go unnoticed on social media, within minutes of airing the race, Julmis was a trending topic and joke throughout the night. Hoping to  some positivity to what many people feel was a failure on the athlete’s part, we immediately posted our clip of Julmis completing the race on all our social networks and within hours of our video going viral, NBC and many other publications had published their stories also congratulating the Haitian Hurdler for finishing his race.

What NBC didn’t show was Jeffrey Julmis getting up & finishing every hurdle. That’s the spirit of a champion #Haiti pic.twitter.com/AJsG7gWx5q 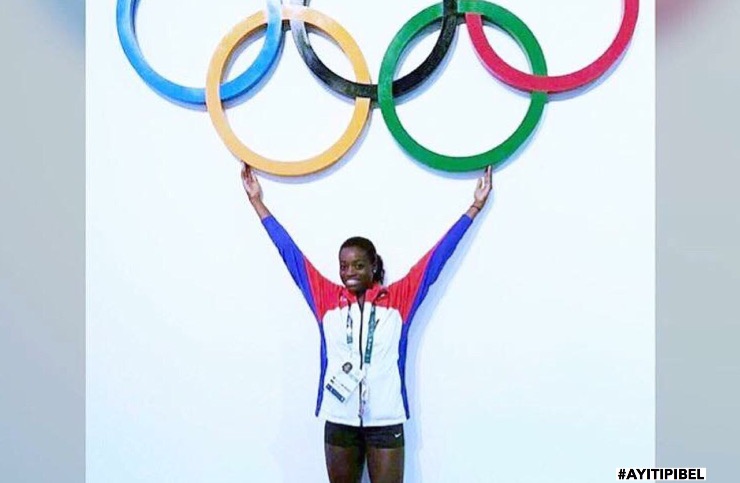 Mulern Jean participated in the first round of the 100m hurdles women with 47 other athletes in 6 heats. Mulern Jean was disqualified in her heat  under IAAF rule 168.7b (deliberately knocking down a hurdle). The competition for  the 23-year-old Haitian athlete stopped there.

At 23, the young athlete plans to continue her studies to earn a master’s degree in criminology. She is enrolled in Master program of the FSU. 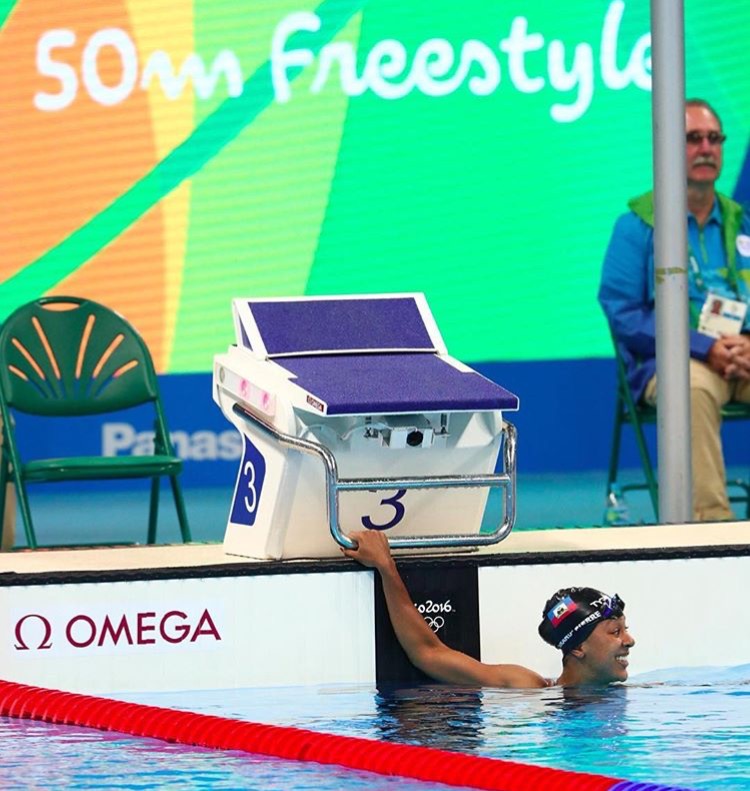 On Friday (Aug. 12), Naomy Grand’Pierre, a college student at the University Of Chicago made history as the first woman swimmer from Haiti to compete in the Olympics. Grand’Pierre commenced her historic appearance  in the women’s 50-meter women’s freestyle, where she took 2nd place in heat 5. History was made and my dream came true!

Naomy did not qualify for the semifinals  but Grand’Pierre still left the pool with Olympic-sized aspirations. She wants to use her moment to motivate other Haitian girls to swim, according to federation officials, In Haiti  only 1 percent of children know how. 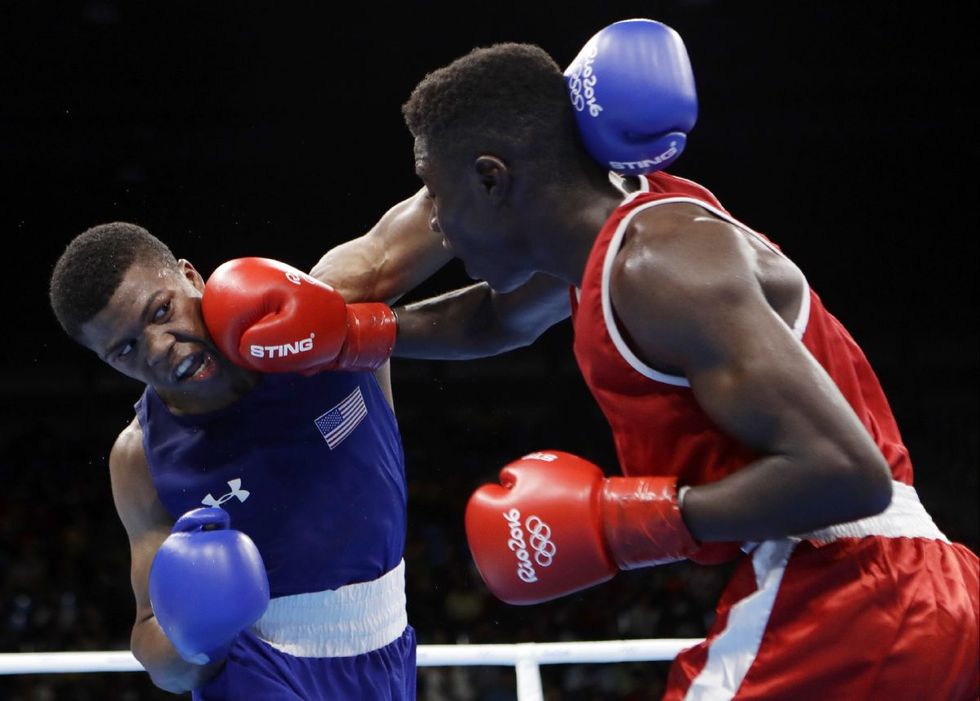 Boxer Richardson who hoped to bring a gold home for his county  was eliminated by American boxer Gary Russell. After a disappointing defeat, Richardson Hitchins took Facebook to express his gratitude and what’s next for him.

I want to start of by thanking God For this amazing Life experience .This is the end For This amazing chapter of my life , Had A Great Fight Tonight With My home Country USA In the Olympic Games I lost A fight I felt the scoring was totally off From what the judges Had It I feel Like I landed The cleaner and more effective punches but it is what it is Russell is A Great fighter and A cool person We are both Young and hungry fighters and I can see this fight happening again in the pro ranks Somewhere in the future. I will be rooting for Russell to bring the Gold back To our Country God bless him and his family , this Part of my life has been amazing Making it to the Olympic Games at 18 and sharing this world stage With the best in the world and knowing I’m apart of that Elite group at a young age Was Such a tremendous Accomplishment for me But I’m done with amature Boxing And Will be looking to start my professional Career I can’t deal with amature boxing Anymore it’s time for me start a new chapter in My life and this One will be Legendary ??? #TeamHitchins #2016olympian ????? #Rio2017 – Richardson Hitchins

Before the fight, Haitian-American professional boxer, Andre Berto who assisted Hitchins in getting to Rio  posted the following message on his Facebook page. “Win lose or draw, u made us proud my man. Your the new generation of this ?? blood line, ya future is bright. Now it’s time to get this money.” Berto represented Haiti in 2004 Olympic, but lost in the first-round. This shows This shows Berto sees himself in Richardson and proud of him. This is only the beginning for the young boxer, who’s already thinking of becoming pro.