Former Haitian soldiers march to demand the return of the Haitian army during a May 18 protest near the UN post in the Carrefour neighborhood of Port-au-Prince. (Thony Belizaire/AFP/GettyImages) 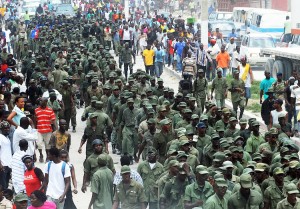 Former Haitian soldiers march during a May 18, 2012, protest near the UN peacekeeping post in the Carrefour neighborhood of Port-au-Prince. The soldiers demanded the return of the Haitian army. Haiti has been without an army since 1995 but current President Michel Martelly is reportedly considering reconstituting the military. AFP PHOTO/THONY BELIZAIRE (Photo credit should read THONY BELIZAIRE/AFP/GettyImages)

For his birthday, Kodak Black is hosting a charity

"Day off in my nazon world 🌍⁠⁠ just love my

What is your immigrant story? 🇭🇹 ⁠ #lunion