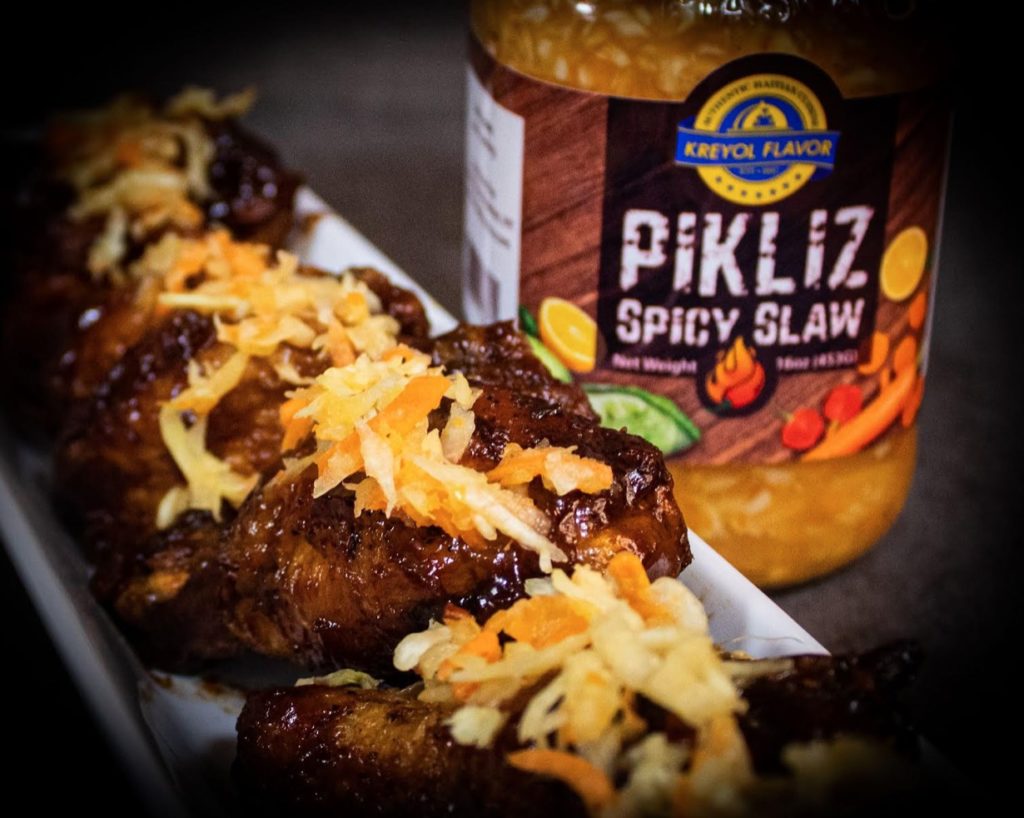 “It’s a flavor explosion!” These are the words of Cursy and Shammy St. Surin, owners of New York’s popular Haitian Restaurant Chain, Kreyol Flavor when asked to describe the taste of their Haitian pikliz.

Cursy and Shammy have been in the game since 2007, opening up their first storefront on Flatbush Avenue in Brooklyn, NY. In 2014 their second storefront was born, located right on Church Avenue and 4 years later they opened their third building also on Flatlands right in the heart of Canarsie. Since then, they’ve managed to gain the trust of the surrounding community. They pride themselves on serving authentic Haitian food, only using products of Haitian descent. Cursy explains that his family’s recipes have been passed down from generation to generation. For them, it was never about making their food “more palatable” for other nations. They wanted to share the bona fide cuisine of their beloved island! It’s what inspired them to expand their business and begin to bottle their pikliz.

Pikliz is a staple of Haitian cookery and is often referred to as spicy coleslaw. Its ingredients consist of pickled cabbage, shredded carrots, bell peppers, and scotch bonnet peppers. It’s most commonly used as a condiment, used to enhance the flavors of practically anything it touches. While many have tried to imitate or modify the recipe, Cursy and Shammy are intentional about keeping the true essence of Haitian pikliz.

However, it doesn’t mean that Kreyol Flavor’s pikliz is just for the Haitian community. Shammy, who has a degree in marketing management from Baruch college made it clear that everything they do when it comes to marketing is for a reason, including labeling. “Spicy slaw” was added to the name and labeling as a way to bridge the gap between other cultures and backgrounds to provide customers with a name they are familiar with. Cursy chimes in on the language barrier they face and feel it’s the reason why Haitian food and spices aren’t as mainstream as something like Jamaican food.

“Jamaicans speak English. No one is intimidated to walk into a Jamaican restaurant and order food. However, most Haitian restaurants have a majority of Kreyol-speaking employees. In fact, a lot of the time even the menus are in Kreyol. Had this not been the case, I think Haitian food would be just as popular a long time ago. However, the key is how we market ourselves while still staying true to our original taste.”

Since starting sales back in January of 2022, Kreyol Flavor’s pikliz has sold all across the U.S., reaching places like Massachusetts, Texas, California, Florida, Virginia, North Carolina, and more. In addition, they’ve landed themselves in several local grocery stores including one in Long Island, and hope to continue to expand as the business grows.

“We want to be the next Goya Foods!”, Shammy explains. “We’d go to the supermarket and look on the shelves and ask ourselves, ‘why aren’t Haitian people selling pikliz?’ There are so many other products that we use every day when we can be profiting from our own recipes. Even the people that we did see selling it weren’t doing it any justice or at least not in the way we felt something like pikliz deserved. We figured we have a great product, so let’s bottle it!” 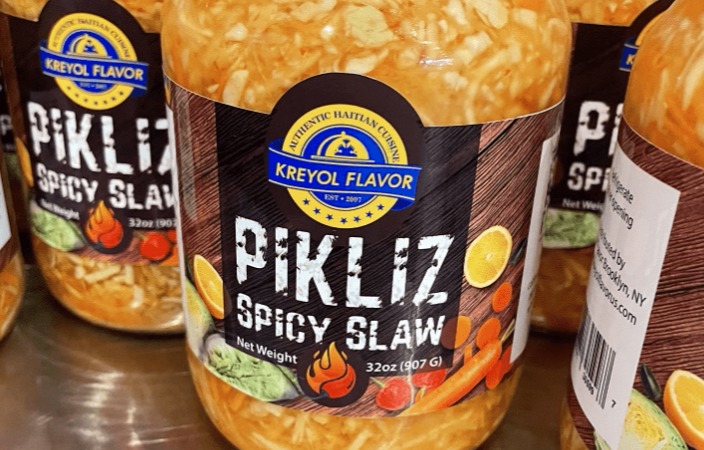 When asked about the root of their entrepreneurial mindset, Cursy recalls his uncle who ran his own business back in Haiti and became quite successful from it. Though he only had a high school diploma, he still made a name for himself and his uncle became someone the family depended on during financial struggles. For Cursy, he was simply inspired by the idea of being his own boss. Being a college graduate from Brooklyn College, he knew he had more than enough resources to make his dreams a reality.

Shortly after graduating, Cursy worked at Bad Boy Records for Sean Combs, who’s better known by his stage name, Puff Daddy. However, working in the industry left a bad taste in his mouth and was more of a reason for him to venture out and work on his own terms. He remembers the lack of pay and only being paid when they wanted to pay him. Now as someone who runs his own business, he prides himself on being able to pay his employees what they rightfully deserve and creating a friendly working environment. In doing so, he believes it has transferred over into their exemplary customer service.

Both Cursy and Shammy acknowledge the common misconception that Caribbeans are known for their poor customer service and while it’s created difficulties, they refuse to make it an excuse.  They’re true believers in the “customer is always right” motto and strive to make everyone happy.

“We try to not be the typical Haitian restaurant,” Cursy adds. “We want to give quality service just as much as we want to give quality food. It’s about finding the balance but there are other factors that may be at play that some people fail to recognize. When something happens at a specific location, sometimes we don’t pay attention to where the location is. We have different locations and certain neighborhoods will be friendlier than other neighborhoods. It all has to do with demographics, income, education levels, etc. All these things play a big part in interactions with customers. A lot of the time we have to take the blame because we are the ones serving the product but there are other things at play that get swept under the rug. We try our best to exceed expectations when it comes to customer service but it’s definitely not easy. Regardless, we love our people and we’re trying to do better for them. One thing about Haitians…they’re the most loyal customers. They’ll tear you a new one and be back tomorrow. That’s something you can’t get anywhere else.” 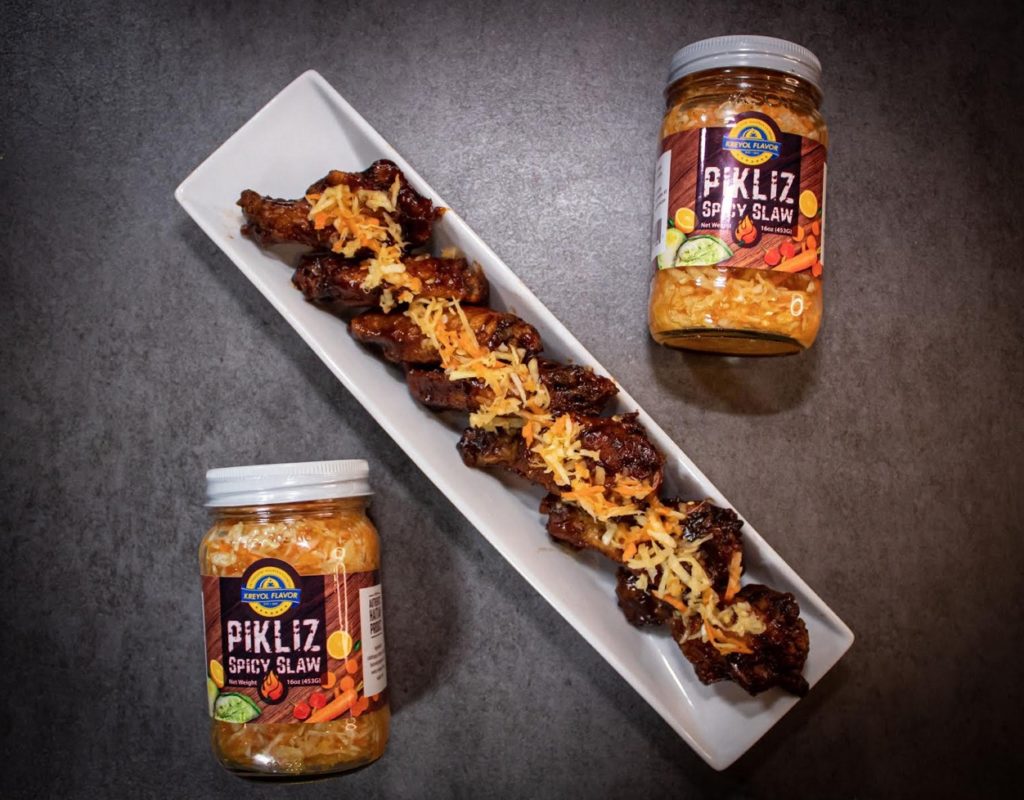 However, they can proudly say that since starting their pikliz business, the reviews have been amazing, to say the least. Customers have praised them for their quick service when it comes to same-day or next-day shipping, packaging as well as the savory taste of their spicy slaw. The difficulty has been meeting the demand which Shammy mentions it’s a good problem to have. Kreyol Flavor has managed to build a brand over the years that people trust, and they both attest to the success of their bottled pikliz to all the work they’ve put in years prior to its inception. Shammy also pinpoints her husband, Cursy’s “beast mode” mentality as the driving force to their success. Nonetheless, they’re not done yet.

“We want Kreyol Flavor Pikliz to be international”, they explain. “This is only the beginning!”

Those who are bold enough to take the heat can purchase their 16 or 32 oz jar either at one of the store locations or through their online website.