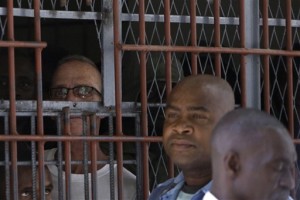 American citizen Steven Parker Shaw, 57, second from left, stands behind bars as he waits for his hearing at a court’s cell in Port-au-Prince, Haiti, Monday, May 21, 2012. Jason William Petrie and Shaw, two Americans jailed in Haiti were charged with conspiracy for participating in a street march on Friday that pressed for the return of the country’s disbanded army, a Haitian government official said Sunday. (AP Photo/Dieu Nalio Chery)