TODAY is the third anniversary of the January 12th, 2010 earthquake that devastated the island nation. Lunion Suite ask that everyone take some time out to say a prayer in remembrance of all the victims of the earthquake. “Remember Haiti” We will never be broken.

According to the initial results of the Haiti Demographic and Health Survey (DHS), which covered 13,350 households, 77 per cent of children aged 6-11 years attended primary school in 2012 compared to just below 50 per cent in 2005-2006 when the last survey was conducted. Acute malnutrition among children aged 6-59 months has been reduced by half from 10 per cent to 5 per cent and chronic malnutrition has been cut from 29 per cent to 22 per cent between 2005-2006 and 2012.

“Results of the survey show that the efforts of partners in Haiti in these three years contributed to progress in many sectors and mitigated the impact on children of the 2010 earthquake, the outbreak of cholera and other disasters.” said Edouard Beigbeder, UNICEF Representative in Haiti. “These findings call for a continued commitment to support the country in sustaining this success while addressing existing challenges and where progress has lagged,” he said.

For the first time in Haiti, the survey, which was combined with a Multiple Indicator Cluster Survey, reflects data on child discipline. It is also the first nationwide population-based survey to highlight the situation of internally displaced persons living in camps because of the destruction caused by the earthquake. 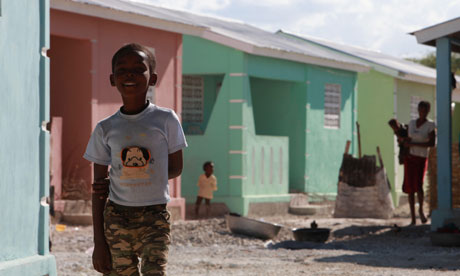