Last night I attended the grand opening of  Basquiat: The Unknown Notebooks at Pérez Art Museum Miami. The show, organized by the Brooklyn Museum, began with a talk by artist William Cordova followed by a discussion with PAMM Director Franklin Sirmans and PAMM Assistant Curator María Elena Ortiz. Attendees enjoyed a performance by the Tradisyon Lakou Lakay ensemble and danced on the terrace to selections by Port-au-Prince’s DJ Gardy.

Following the exhibit, attendees enjoyed a performance by the Tradisyon Lakou Lakay ensemble and danced on the terrace to selections by Port-au-Prince’s DJ Gardy organized by Miami’s Sandy Dorsainvil and PAMM director Franklin Sirmans. 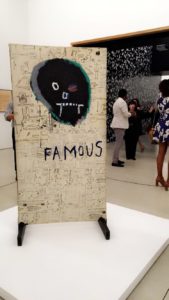 The  exhibit is the first major exhibition focused on Haitian-American Jean-Michel Basquiat’s notebooks, filled with poetry fragments, wordplay, sketches, and personal observations ranging from street life and popular culture to themes of race, class, and world history. This exhibition features 160 pages of these rarely seen documents, along with related works on paper and large-scale paintings.

Basquiat: The Unknown Notebooks is organized by the Brooklyn Museum and is curated by Dieter Buchhart, guest curator, with Tricia Laughlin Bloom, former Associate Curator of Exhibitions, Brooklyn Museum. A fully illustrated catalogue accompanies the exhibition.

A self-taught artist with encyclopedic and cross-cultural interests, Basquiat was influenced by comics, advertising, children’s sketches, Pop art, hip-hop, politics, and everyday life. Basquiat: The Unknown Notebooks emphasizes the distinct interplay of text and images in Basquiat’s art, providing unprecedented insight into the importance of writing in the artist’s process. The notebook pages on display contain early renderings of iconic imagery—tepees, crowns, skeleton-like figures, and grimacing faces—that also appear throughout his large-scale works, as well as an early drawing related to his series of works titled Famous Negro Athletes.

Here are a few pictures and video from the grand opening of my Haitian-American friends, readers and L’union Suite supporters I ran into at the exhibit.