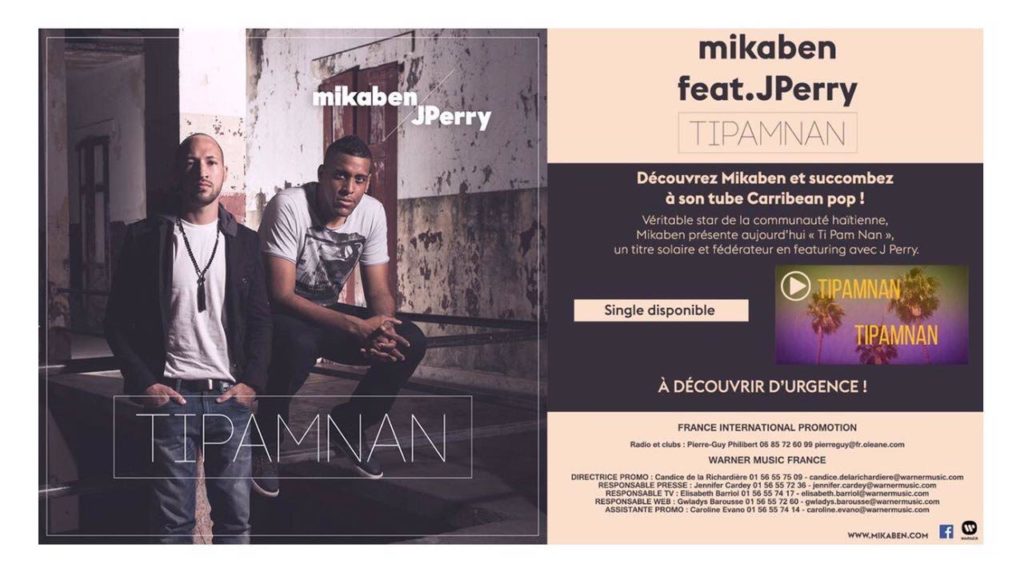 Mikaben Productions is proud to announce that after producing Michael Benjamin as a young Haitian solo artist for years, it has officially signed a licensing and distribution agreement with Warner Music France.

Under Warner Music France’s “Caribbean Pop” division, Mikaben is formally entering the international market with his “Ti Pam Nan” single. Released in Haiti in December 2014, this collaboration with JPerry was officially launched on July 29, 2016, in Europe, by the music giant as it already had great success on the radio stations and web-based platforms in the Haitian Community.

As a long-time musician, Mikaben is no stranger to the Haitian Music Industry. Serving as a solo artist, he has produced and collaborated with several top Caribbean artists and Bands, Mikaben has garnered the respect of many musicians and has created a strong fan base within the Haitian community worldwide.

“The long-term agreement that was negotiated between Warner Music France and Mikaben Production comes with an option of a complete four album distribution deal. Such action proves that Haiti’s culture is beautiful and very exportable,” explains Georges Andy Rene, the attorney who represented Mikaben during the agreement.

In an effort to continue to promote the importance of protecting Copyrights, as an artist, Mikaben took this opportunity to visit the Bureau of Copyrights in Haiti to file and officially register “Ti Pam Nan,” thus ensuring that JPerry and he are exclusively covered. Joined by his father, the legendary Lionel Benjamin during that visit, Mikaben will continue to focus on highlighting the significance of safe-guarding artist productions, as other artists have done in the past and should continue to do so.

Making this monumental move as a new Warner Music France artist, Mikaben knows that he is one step closer to helping the entire Haitian Music Industry grow bigger and stronger to start making the international community take notice that Haiti and its music should be and will soon be on a global plateau.