Anky Cyriaque is a Haitian-born director who operates by the concept “Story is King”.  Cyriaque acquired a distribution deal from Shorts International where his two short films “A Cat in Heat and “Love & I had a Fight” aired on their Direct TV channel. 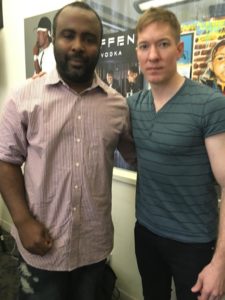 On July 10th,Cyriaque completed production on a television pilot for “The Wohs”. The Wohs is a supernatural drama based on the dealings of the music and entertainment industry.

The cast included Joseph Sikora from STARZ network hit series “Power”, Taral Hicks from “A Bronx Tale”, and industry favorite “Belly”, and Marc John Jeffries who stars in the newly released “Nerve” and his breakout role in “Losing Isaiah”. The cast also included a few surprise cameo’s, one being Yandy Smith, TV personality, and music mogul.

Anky Cyriaque is currently in pre-production on his first feature film “A Devilish Curiosity”. Cyriaque has enlisted Academy Award winner William Hurt as his apart of his cast for his feature film.Everyone has their time in the spotlight, and Anky Cyriaque is next in line.