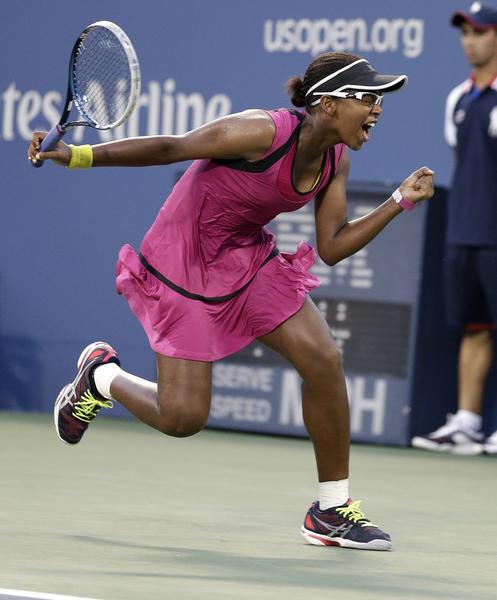 When Victoria Duval was 7 years old, she trailed along once again to watch her older brothers play in a tennis tournament in Santo Domingo, near her childhood home in Haiti. The tournament director had always watched her sitting on her mother Nadine’s lap and suggested she let Victoria compete this time, if only so Nadine could focus on the matches.

Duval didn’t know where to stand on the court, how to hold the racquet and certainly not how to keep score, but you’ve probably already figured out that the plucky little girl won the whole tournament. At that moment, tennis forever trumped her previous love of ballet.

“After that, my mom was like, ‘OK, you have to choose now,'” Duval said. “Tennis seemed to be appropriate.”

Duval, who was ranked 298th in the world and entered this year’s US Open as a qualifier, was paired against No. 11 seed and former US Open champ Samantha Stosur in the first round. Stosur, her arms roped with muscle, had reached at least the quarterfinals in her past three Open appearances, winning it all in 2011. Duval, now 17, was playing in just the second Grand Slam match of her career. But to the rhythmic chants of “USA!,” Duval defeated Stosur 5-7, 6-4, 6-4 on the Louis Armstrong Stadium court in a match that took 2 hours, 39 minutes.

“I was really happy,” Duval said in her high-pitched voice. “I mean, you can tell by all the jumping I did.” Twitter congratulations rained in — which she couldn’t even follow because she doesn’t have an account of her own — from tennis commentator Darren Cahill to New York Knicks forward Amar’e Stoudemire to rapper Lil Wayne.

“Weezy F Baby?!?” she shrieked when she was told.

Yes, Duval is an unpolished gust of fresh air.

Unlike 15 years ago, it’s rare these days to see a teenager pull an upset on such a big stage. And with her age comes a guileless enthusiasm. Her favorite SpongeBob character is Gary, her motto is “Have Fun” and her goal as a young player was just to beat her brothers.

But her reality is more complicated. Her father, Jean-Maurice, was injured in the 2010 earthquake in Haiti as he stayed behind to help run a medical clinic while Victoria trained and played tennis in the States. After being buried alive for hours, he was able to pull out of the rubble, but not without injuries that reportedly included a punctured lung. But a family friend via tennis, real estate developer Harry Kitchen, chartered a private plane to bring Victoria’s father back to the U.S. for treatment.

“We’re forever grateful to them,” Duval said. “If it weren’t for them, my dad definitely wouldn’t be here today. Not everyone just pays $30,000 to fly a helicopter to save someone.”

Although Victoria was born in Miami, her parents are both from Haiti. And she might have continued to grow up there as well if not for a violent robbery that turned into a hostage situation. Victoria was with her aunt and cousins at their house when it happened.

“She was held at gunpoint,” Nadine said. “It was so scary.”

Nadine rushed to the house and the SWAT team was already there. They heard the officers talking about an operation, which in French is the same word for surgery, and were terrified Victoria or another family member had been injured.

A year later, the family moved to Boca Raton, Fla. Jean-Maurice is unable to work in medicine because of his injuries, although his health has improved, and the family has relied on the USTA and other sources for support and training. Billie Jean King tapped Duval to play on the Philadelphia Freedoms (World Team Tennis) this summer and has become a mentor and supporter, sending Duval a text after her upset win.

Coach Todd Morelle has also agreed to work with Duval on a pro-bono basis, in part because he sees a champion in her 5-foot-10 frame despite her raw serve.

“She’s only going to get a lot better,” Morelle said. “She is half as good as she is going to be.”

Tennis has given much to the Duval family — it was a connection that saved her father’s life — but it is has also come with expenses and expectations. Still, Nadine stresses the family has never nudged Victoria to play.

“That’s her passion,” Nadine said. “Nobody pushed her into tennis.

“My only little girl,” she confessed with a laugh. “I wanted her to be a ballerina.”

Her Interview After Her Win Below: