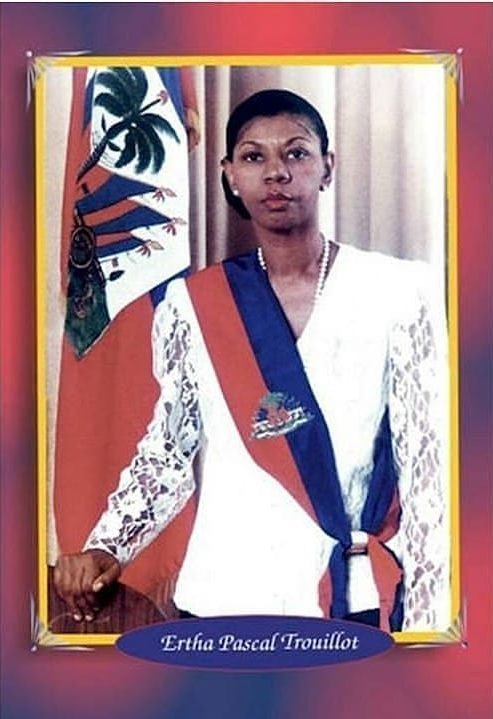 For black history month, I am going to do my best to continuously feature Haitian people who contributed to the advancement of people of African descent.

Ertha Pascal-Trouillot (born August 13, 1943) was the provisional President of Haiti from 1990 through 1991. She was the first woman in Haitian history to hold that office. Her father, Thimocles, was an ironworker and died when she was young. Her mother Louise (née Dumornay) was a seamstress and embroiderer. Pascal-Trouillot was the 9th of 10 children and when she was 10, she and one of her brothers went to the Lycée François Duvalier and was mentored by her future husband, Ernst Trouillot, who was 21 years her senior. In 1971, she received her law degree from the École de Droit des Gonaives in Port-au-Prince. From 1975 through 1988, she held various positions as a judge in the Haitian federal courts until she became the first woman justice of the Haitian Supreme Court.

Pascal-Trouillot was chief justice when she temporarily became Haïti’s first female president on March 13, 1990, following a revolt that overthrew the government-run by Prosper Avril. General Herard Abraham remained in charge for three days and then transferred the power to Ertha Trouillot. As provisional head, her job was to coordinate the transition to democracy with the Council of State, which had veto power over her. She oversaw the first truly free elections in Haiti on December 16, 1990 (Haitian general election, 1990–1991), which Jean-Bertrand Aristide won with 67% of the vote.

On 6 January 1991, a coup attempt seeking to pre-empt an Aristide presidency took place, when Roger Lafontant, a Tonton Macoute leader under Duvalier, seized the provisional President Ertha Pascal-Trouillot and declared himself president. After large numbers of Aristide supporters filled the streets in protest and Lafontant attempted to declare martial law, the army crushed the incipient coup. Aristide had Pascal-Trouillot arrested under charges of complicity in January attempted coup d’état. She was released the next day after US intervention in Port-au-Prince. The US demanded a lift on the ban on departure. Pascal-Trouillot left the country shortly after but returned more than a year later. Since then, she lives away from the public eye and is currently working on drafting volumes of the Biographical Encyclopedia of Haïti. – via Wikipedia

According to the Haitian Times:

On March 13, 1990, Ertha Pascal-Trouillot became the first woman in history to assume the presidency of Haiti. She served as the provisional President through 1991. In the turbulent aftermath of the fall of the Duvalier regime that saw coup d’etats, military juntas and violence in the streets of the capital, Trouillot steered Haiti through its first major test as a new democracy — free democratic elections.

Pascal-Trouillot, the 9th of 10 children, was born on August 13, 1943, in the prosperous Port-au-Prince suburb of Petionville. Her father, Thimocles Pascal, was an artist who worked ornamental iron, and her mother Louise Dumornay, was a seamstress and embroiderer. Pascal-Trouillot went on to study law at École de Droit et des Sciences Économiques des Gonaïves in Haiti’s state university. The man who would become her husband, Jean-Jacques Dessalines Ernst Trouillot, encouraged her to become a lawyer. He was president of the Bar Association.

In 1971, Pascal-Trouillot was sworn in at the Palace of Justice, and four months later she and Trouillot were married. Though her husband was twenty years older, and played a significant role in her life, Pascal-Trouillot garnered a reputation for being strong and resolute. This would serve her well when claims surfaced that she was a Duvalier sympathizer, because in the early 1980′s, Pascal-Trouillot served as lower-court judge and her husband served as counsel to the National Bank. Those claims were questionable since she had two brothers who were severely impacted by the brutal regime — one was paralyzed from the waist down by a bullet from a tonton macoute, and the other was arrested, then threatened with execution.

She lead the country in coordination with a 19-member Council of State, and successfully managed one of the most peaceful democratic electoral and constitutional transitions in Haiti’s history. On December 16, 1990, Jean-Bertand Aristide became the first democratically elected president of Haiti. And once he assumed power, Aristide placed Pascal-Trouillot under house arrest, alleging she was a co-conspirator in a failed coup attempt led by Roger Lafontant (a staunch Duvalierist) to remove her from power right before he took office. Pascal-Trouillot was released at the prompting of US President George H.W. Bush.

More than twenty years after Pascal-Trouillot’s brave leadership, Haiti’s nascent and fragile democracy still stands. The Haitian people have lived through two more coups d’etats, economic turmoil and natural disasters. But Haiti has one president who’s served out both his mandates, and participated in two successful transitions of power. That’s the legacy of Ertha Pascal-Trouillot.