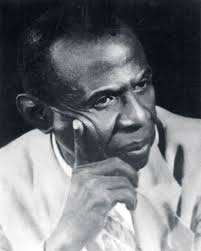 Jean Price-Mars (b. 15 October 1876; d. 1 March 1969), born in Grande Rivière du Nord, was a Haitian teacher, diplomat, writer, and ethnographer. Price-Mars served as secretary of the Haitian legation in Washington (1909) and as chargé d’affaires in Paris (1915–1917). In 1922 he completed medical studies that he had given up for lack of a scholarship.

After withdrawing as a candidate for the presidency of Haiti in favor of Stenio Vincent in 1930, Price-Mars led Senate opposition to the new president and was forced out of politics. In 1941, he was again elected to the Senate. He was secretary of state for external relations in 1946 and, later, ambassador to the Dominican Republic. In his eighties, he continued service as Haitian ambassador at the United Nations and ambassador to France.

Jean Price-Mars was one of foremost intellectuals in the African diaspora. As a member of Haiti’s establishment, he consistently challenged the affluent class to acknowledge the culture of Haiti’s masses. Price-Mars played a major role in the global Negritude movement, and Haiti’s literary renaissance after the American occupation. His 1928 ethnological study, Ainsi parla l’oncle, was a tour de force — it was a definitive argument for the nature and African origins of the Haitian identity.

Price-Mars was born on October 15, 1876 in Grande Rivière-du-Nord, Haiti. He was raised by his religious Catholic grandmother, and a tolerant Protestant father. Mars took charge of his son’s elementary schooling and instilled in him an appreciation for Haitian folklore, told in the mother tongue. For secondary education, Price-Mars attended Lycée Grégoire du Cap-Haïtien and Lycée Pétion in Port-au-Prince. In 1899, Price-Mars received a scholarship to study medicine in Paris (which he would finish 22 years later). He studied social sciences at the Sorbonne, Collège de France and Musée du Trocadéro.

Soon thereafter, he became a diplomat for the Haitian government. It was then he began to use “Price” in honor of Haitian poet Hannibal Price. His numerous missions in Europe would enable him to study African traditions, and engage in passionate race theory discussions with other black intellectuals and writers from the Negritude Movement — and it’s American wing, the Harlem Renaissance.

He began to manifest a loathing for the Western ideology and excesses of Haiti’s elite, in first major text, La vocation d’elite (The Vocation of the

Elite), published in 1919. Then in 1928, he produced the ground-breaking tome, Ainsi parla l’oncle (So Spoke the Uncle). It was first ethnological study of the broader Haitian population’s culture and language. Written in eloquent historic prose, Ainsi parla l’oncle affirmed that Haitians were not “colored French people” — they had a distinct African heritage and black identity. His work, written during the US Occupation (from 1915 to 1934), had a profound impact in the development of a nationalist agenda and Haitian pride.

Price-Mars played a major role in developing the study of the humanities in Haiti. In 1941, he founded the Institute of Ethnology, where he served as chair of sociology and Africana studies until 1947. On the global stage, his work resonated with other leading black figures, like Aimé Césaire and W.E.B. Du Bois,

seeking to dismantle the structures of racism in their home countries. In 1956, Price-Mars was unanimously elected as president of the First Congress of Black Writers and Artists held in Paris — that same year, he became the president of the Society of African Culture, founded at UNESCO. And in 1966, Price-Mars was invited to Senegal by President Léopold Senghor, where he received an honorary doctoral degree from the University of Dakar.

A man before his time, Price-Mars remains just as relevant today. He blazed trails for the scientific study and complete embrace of black cultures, as a model for understanding all cultures. And he advocated we did so, using our language, practicing our religion and telling our stories.

“…Nothing can prevent tales, legends, songs come from afar or transformed, created by us, from being a part of ourselves revealed to ourselves…They constitute in a surprising and remarkable way the fundamentals of our spiritual unity. Where, therefore, can one find a more authentic image of our society?”