I am so excited about watching the movie Red Tails. I didn’t get a chance to see it this weekend but I will definitely be in line next weekend with my husband. While reading all the stories about the American airmen, it was an absolute delight to find out Haitians share a piece of the Tuskegee legacy and thankful someone took the time out to research it for the rest of us. Thanks to my fellow blogger and friend Kreyolicious for such an informative post.

Did you know that there were Haitians recruited to fight in World War II for the United States?

In the early 1940s, an ad appeared in a Haitian newspaper recruiting 40 pilots for training at the Tuskegee Institute in Alabama. We know for sure that at least 5 pilots went for training at the Tuskegee Institute, and most of them were in the Haitian Army or Airforce. And we know their names: Ludovic Audant, Philippe Célestin, Raymond Cassagnol, Eberle J. Guilbaud and Nicolas Pelissier Alix Pasquet.

The first three men (Raymond Cassagnol, Alix Pasquet, and Philippe Célestin) left Port-au-Prince in February of 1943 for Alabama (Via Puerto Rico, via Miami via Jacksonville), and had to ride in a Blacks-Only transportation or had to sit in the back of trains, as blatant segregation was in full swing in those days, something they were totally unaccustomed to in Haiti. Cassagnol would later write in his autobiography Mémoires d’un Révolutionaire that he avoided going off the Tuskegee Army Training Field and off the campus, because he couldn’t stand to be made to feel inferior, and the humiliation that came with it. It was an exciting time for the three. The Afro-American, one of the most popular and widely circulated black newspapers of the time, even had a feature story on the men in its April 10, 1943 issue. In it, it was revealed that Pasquet and Célestin were graduates of their native land’s Ecole Militaire D’Haiti, and were already officers, while Cassagnol had worked as a mechanic for the Haitian Airforce.

World War II was in full swing and the USA was in need of soldiers, but Cassagnol maintains that the requirements were still very rigid, so much so that one of them didn’t make it. Célestin was a “washout”, a term used to describe someone who’s eliminated during training at Tuskegee. He succeeded in the Primary stage, and the Basic Stage, but was eliminated during the Upper Basic stage. Shortly after Cassagnol’s graduation, three more Haitian pilots were recruited from Haiti: Sergeant/Lieutenant Ludovic Audant and Sergeant/Lieutenant Nicolas Pelissier and Eberle Guilbaud. COntinue Reading Here….

Cassagnol, who would become the only surviving of the Haitian Tuskegee Airmen was a special guest at the inauguration of US President Barack Obama in 2009. Decades before, he had been honored for his contributions to World War II as a Tuskegee Airman gunpilot in Italy, and years later his achievements were recognized by the USA as were that of Guilbaud and Pasquet. Pasquet’s son accepted his award on behalf of his late father. 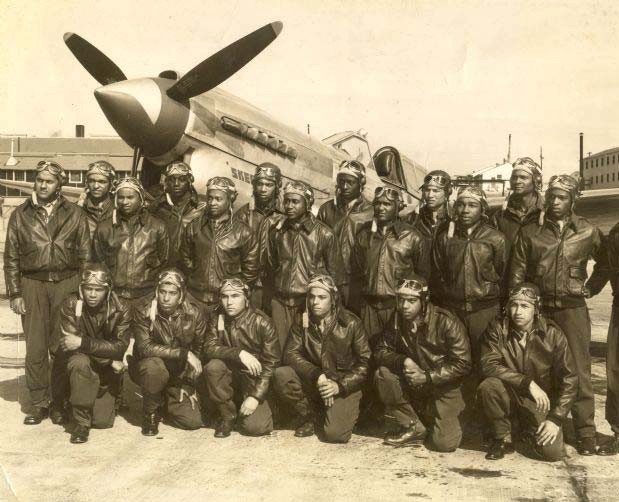