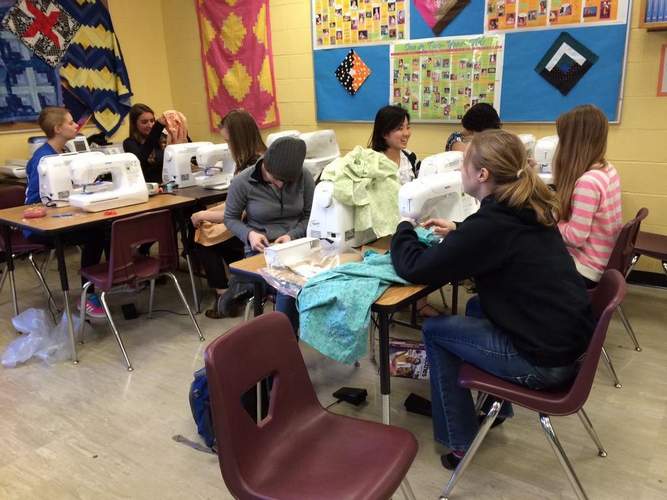 There’s been a few stories in the press lately about students giving back to Haiti or traveling to Haiti during their spring break. It’s always refreshing to see teenagers using their skills to give back to others.

Students at a sewing class at Iowa City West High School were originally supposed to sew together costumes for the school’s theater department. But just before the trimester began, the assignment changed. Instead, about a dozen students will spend the next two months stitching together dresses for children in Haiti.

“They had the opportunity to leave the class once they found out what it was,” said Beth Long, who teaches the sixth hour sewing class. “No one wanted to leave.”

Jen Secrist, a science teacher at West is behind the project. She has traveled to a school in Haiti, called Mission Starfish, several times in the past. This time, she’s hoping to bring more than 80 dresses with her.

“When you hand a child who has nothing, most days not even a meal, this pretty little dress, they will just glow, Secrist said. “They’ll be radiant with excitement and know that they’re loved.”

About 15 West students will join Secrist on a mission trip in July — that’s when the dresses will be delivered.

She said the class is in need of fabric or monetary donations in order to continue the project. All donations can be dropped off or mailed to the main office at West High. – Read More Here

Kudos to the teenagers for wanting to do something that will benefit other children.