Singer Haitian-American  singer Jason Derulo lashed out at American Airlines on Wednesday night, accusing the company of racial discrimination after a dispute over luggage where police officers were called.Derulo, 27, was flying from Miami to Los Angeles when he and eight friends ran into issues with their check-in time as well as with checking their combined 19 bags. The 27-year-old Haitian-American singer said that as he and his friends were disembarking, the captain came out and began cursing at them and ordering them off the plane.

According to ABC Local 10,

Singer Jason Derulo took to Instagram on Wednesday night to air his frustrations over an American Airlines flight from Miami to Los Angeles.

In his post, Derulo writes that he felt discriminated against while he and his friends were boarding the plane.

“I spent millions on your airline throughout the past ten years between myself and my entire staff but have still experienced racial discrimination today at Miami airport!!! Called 15 police officers on me as if I’m a criminal! It’s not ok that when you find out who I am the gears change! F— that!! I want answers,” he wrote.

Miami-Dade police said that Derulo and his friends arrived for the flight about 45 minutes early and wanted to board the plane.

In an incident report, police said an American Airlines employee approached an officer and said that the passengers arrived at 4:15 p.m. for a 5 p.m. flight and that they “all smelled of marijuana and were starting to get aggressive.”

The officer asked the employee if she needed assistance and the employee said she didn’t. That same officer then saw Derulo’s group pass through a security checkpoint.

In a video obtained by TMZ, Derulo said that he is a Concierge Key member of American Airlines, which allows him to bring unlimited bags onto a plane.

American Airlines told Local 10 News that passengers most elite customers receive three checked bags for free and that Derulo was attempting to board with 19 checked bags. 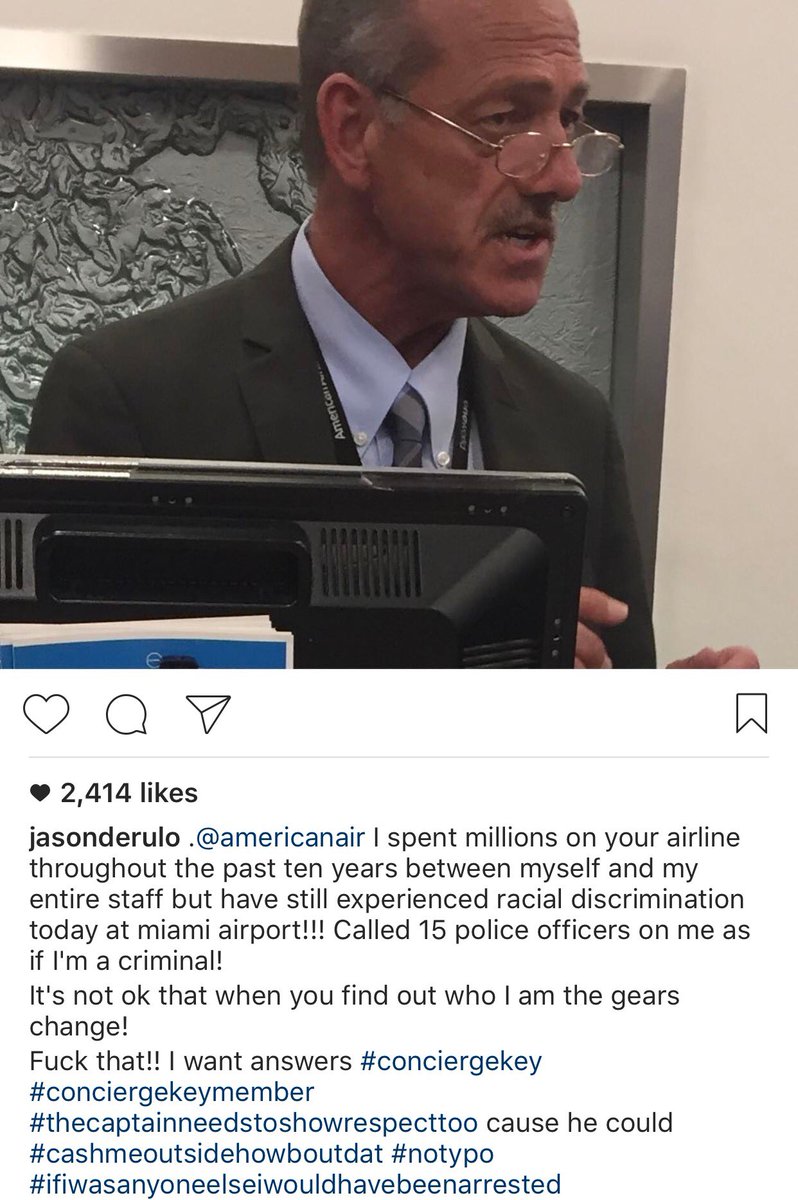 According to Derulo, a member of his group decided to stay behind to bring the bags onto the plane while the remaining members got onto the plane.

Shortly after the plane left the gate for  the runway, the remaining member called Derulo, who was on the plane, and told him what he was being charged for the ticket and luggage, according to Miami-Dade police.

Derulo then stood up on the plane and demanded that they go back to the gate, and police were called again.

That’s when police were called to the gate because “the captain of the plane needed  several passengers removed from the plane,” according to an incident report.

“The pilot comes and makes a scene,” Derulo said. “He said ‘I want these guys off the plane right now.’ I said ‘Listen to me sir, you’re not going to talk to me like I’m your son.'”

When the plane got to the gate, an officer met with the passengers.

“I attempted to have all the passengers stand off to the side so I could determine what was going on, but they refused and kept walking away,” the incident report said. “I finally asked all the passengers for identification. At that time they all gave me their IDs.”

An American Airlines representative told the police that when a passenger at the executive counter was going to be billed $4,000 he called a passenger on the plane and that the passenger got into an argument with the flight crew.

Since Derulo isn’t named in the arrest report, it’s unknown if he is the passenger police refer to in the report.

The plane then returned to the gate after the passenger told the pilot he didn’t want to fly, the report said.

Derulo acknowledges that if he wasn’t a celebrity, the treatment he got at the airport may not have been the same.

“Soon as they find out who I am the whole gear changes. It’s all relaxed and it’s all cool,” he said. “If I was not who I was, if I wasn’t Jason Derulo, I wouldn’t be here right now I’d be in f—— cuffs. It’s 100 percent racial because the initial thought in people’s minds is ‘these hoodlums are causing problems.'”

American Airlines issued a statement about the incident.

“American Airlines flight 275 returned to the gate prior to departure. A passenger elected to deplane in order to travel with their checked bags,” the statement said. “The passenger has been rebooked with his checked bags on a later flight this evening.”