Yesterday, Haitian American singer Jason Derulo and his singer/actress girlfriend Jordin Sparks sat down for their first exclusive interview as a couple on today’s Wendy Williams.

They’ve been together now for little more than a year, and we’ve seen in this time plenty pictures of them together, on vacation and work, and talking to the media at red carpets, but their appearance on ‘The Wendy Williams Show’ truly marks the first official interview of Jordin and Jason. During the just over 7 minutes their segment lasted, Wendy had time to ask the couple if theirs was love at first sight, if they plan to live together, had them participate in a fun game called ‘How You Lovin’?‘, but there was also room for more serious matters, like when Jordin spoke of her work with Whitney Houston in ‘Sparkle‘.

The couple revealed that it wasn’t exactly love at first sight but the relationship started to progress after they  initially met each other while in the Bahamas for a show. Jordin caught Jason’s interest after she came to his dance rehearsal and impressed him by sticking around to watch him rehearse the entire time. The two currently live in different cities but are making their “long distance relationship”.  Jordin revealed that she just brought her first home located in Phoenix, Arizona and Jason revealed that he just bought his dream home in Miami.

I live in Miami. I actually just bought my dream house as well. Its everything that I always wanted, it has a basketball court, 9 bedrooms, 2.5 acres. 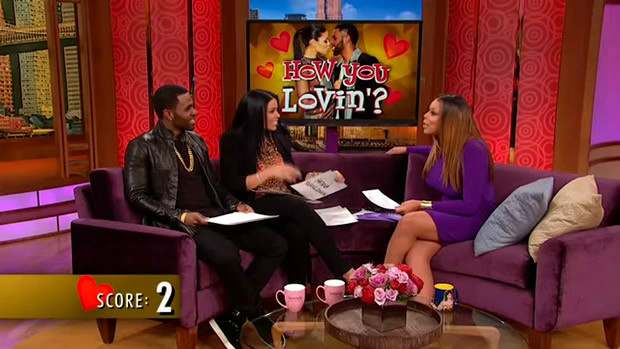 Fam, what does this mean? 👀😩⁠ #lunionsuite