During the moment of silence held in Port-au-Prince, Haiti on Friday to mark the eighth anniversary of the devastating 2010 earthquake, President Jovenel Moise placed the first stone for the construction of a new National Palace, which was destroyed during the earthquake in Port-au-Prince. 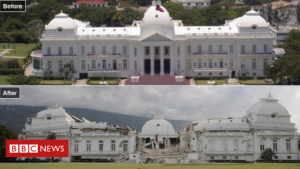 According to the administration, through this initiative, which marks an important moment in the country’s major reconstruction project, the government intends to rehabilitate Haitian pride and restore hope to citizens.

During the ceremony, the Speaker of the Senate, Joseph Lambert, the Speaker of the Chamber of Deputies, Gary Bodeau, and the Vice-President of the Court of Cassation, Wendell Coq Thélot testifies to the will of President Moïse to bring together the different powers of the State to provide concerted responses to the country’s problems and accelerate its economic and social development.

This ceremony was to call for the solidarity of all citizens in order to recover our dignity and rebuild Haiti. He also praised the symbolic contributions of several young people and organizations to materialize the construction project of the new presidential palace.

“The time has come to rebuild our country and we want to take control of our destiny,” insisted the President of the Republic.

Clément Bélizaire, coordinator of the Working Group on the construction of the National Palace explained that the future presidential building will be a modern construction equipped with the latest technologies, particularly in terms of security. He added that the new national palace will be rebuilt on the model of the one built in 1912 by the architect Georges Baussan.

Meet The People, Places & Businesses Featured on #ConanHaiti Special
Andy Beauchamp “My Paintings Are An Expression of Life”