Conan O’Brien recently tweeted he was on his way to Haiti “to explore and make some new friends,” despite President Donald Trump’s very negative Yelp review of the republic.  Trump made headlines when he asked members of Congress why the U.S. was taking in immigrants from “sh*thole” countries including Haiti.

The TBS Late night host travel internationally for the eighth time in three years for a “CONAN Without Borders: Haiti,” a primetime special which premiered earlier tonight 10 p.m. In the special he mentioned, visited and highlighted a few people, places, business and things we wanted to share some additional information on.

Honored as one of the founding fathers of Haiti, Jean-Jacques Dessalines was second in command under Toussaint L’Ouverture during the Haitian Revolution and was the general who emerged after L’Overture’s capture to lead the insurgents in declaring Haitian independence on January 1, 1804. 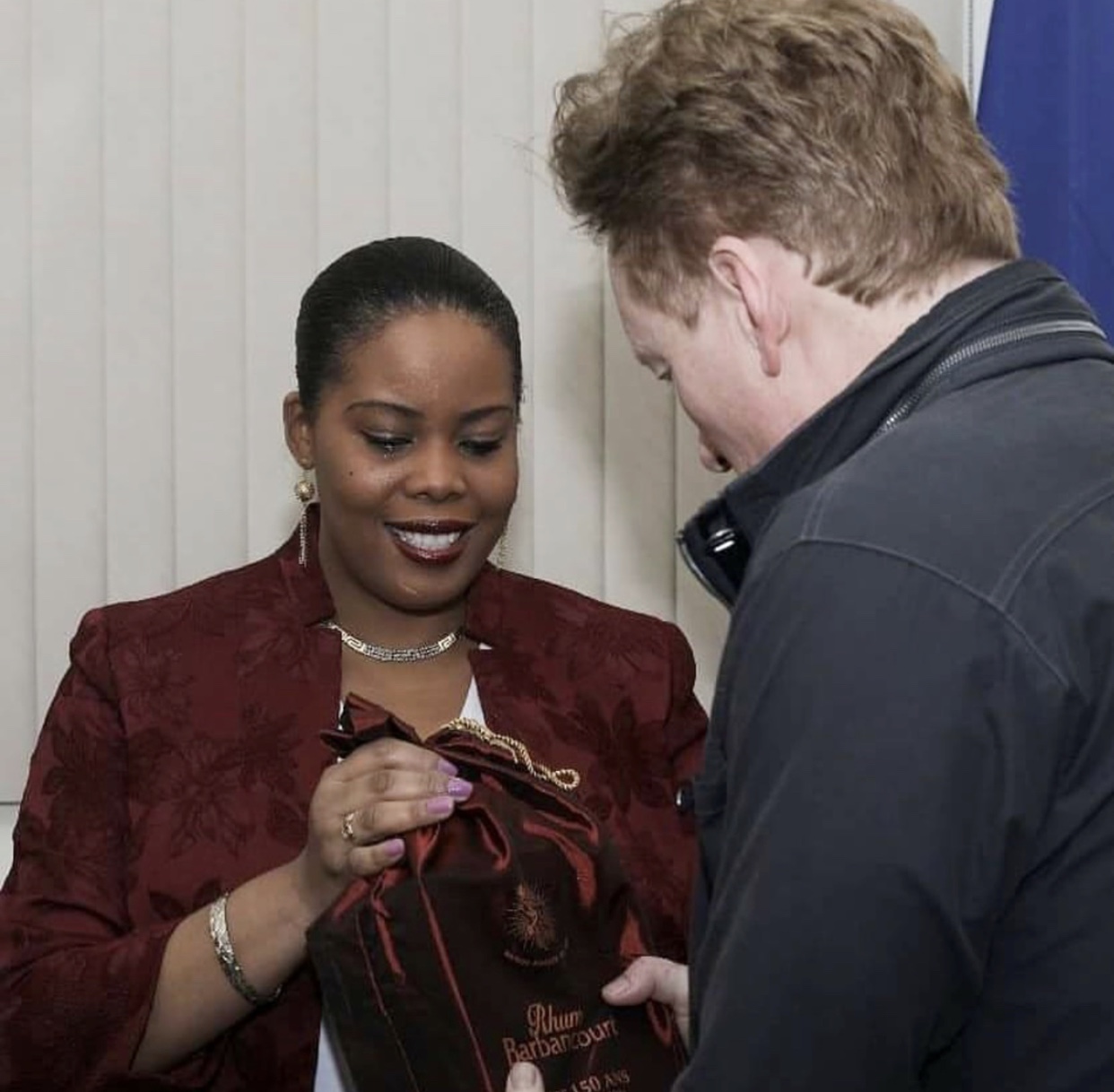 Rhum Barbancourt is a rum produced and bottled in Haiti by Société du Rhum Barbancourt, D. Gardère & Cie.. The company is one of Haiti’s oldest, and its rum is one of the country’s most famous exports, widely regarded as among the finest rums in the world. The family business began on March 18, 1862, producing rum directly from sugar cane juice. Dupré Barbancourt, a Frenchman from the cognac-producing region of Charente emigrated to Haiti and founded his company at the end of 1862.

Barbancourt’s products are highly regarded and have won many tastings and competitions, and have won excellent reviews from rum connoisseurs. Available in the United States, its Estate Réserve is aged for 15 years. Other popular products include the 5 Star Réserve Spéciale aged for eight years, the 3 Star rhum aged four years and a clear, white rhum, all made from fresh sugar cane juice. Barbancourt’s rums are marketed in 20 countries, namely the Caribbean, the United States, France, and Italy. Barbancourt is among Haiti’s best-known companies internationally.

PRODEV is a Haitian-led organization founded in 1995. Their mission is to provide quality education to children in underserved communities. The children receive scholarships, free books, and supplies, free meals, and clean water. The teachers receive year-round training and coaching and the organization work impacts 55,000 children in the North, South and West Departments. You can support PRODEV with tax-deductible donations.

Tap-Taps are gaily painted buses or pick-up trucks that serve as share taxis in Haiti. They may also be referred to as camionette. Literally meaning “quick quick”, these vehicles for hire are privately owned and ornately decorated. They follow fixed routes, do not leave until filled with passengers, and riders can disembark at any point in the journey.
Often painted with religious names or slogans, Haiti’s tap-tap is known for its lavish decoration, and many feature wild colors, portraits of famous people, and intricate, hand-cut wooden window covers.

The DOT center is a hub for the Haitian artisan community, providing resources and materials. The concept is similar to a co-op system, where becoming a member, artisans have access to hands-on training by designers and educators, modern machinery and tools, a network of contacts and buyers, as well as access to an interest-free loan developed by the Clinton Foundation to provide artisans with start-up capital for orders.

Based in Port-au-Prince, Haiti, Caribbean Craft was founded in 1990 to address Haiti’s high unemployment through artisan training, design assistance and by opening new export markets for their creations. In 2006 Caribbean Craft became a woman-owned company, and in 2008 it was the first Haitian company to invest in a permanent showroom in Atlanta’s AmericasMart. Caribbean Craft produces over six thousand different items from giftware to home décor pieces suitable to home décor stores, gift shops, and tourist-oriented stores.

Transform local Haitian ingredients like passion fruit, cane sugar, mangoes, and moonshine into flavorful tidbits that dance on your tongue. Visit their restaurant, or take home one of our bottled sauces or craft cocktails, craft cocktails, bottled cocktails sourced directly from the countryside. Myabel restaurant features Creole cuisine and cocktails made with local products.

Belzeb offer products made from fresh cosmetic-grade natural botanicals, pure essential oils, and cosmetic-grade fragrance oils to provide you with beautifully handcrafted and luxurious products used in some of the Caribbean’s Spas. Belzeb is a cottage company that creates natural soaps, and bath & beauty products. Located on the lush Caribbean islands of Haiti and Grenada, Belzeb prides itself in handcrafting all of its products, one small batch at a time.

Belzeb was the first natural cosmetics brand made in Haiti. Over 11 years ago Belzeb created its own fair trade program around Haiti. By satisfying the demand for ingredients in a fair way Belzeb helped create sustainable trading relationships with women’s groups in Haiti.

We couldn’t find a lot of information on the cereal but the founder is Guelmana Rochelin and on the special, she describes it as the first single serving cornflakes made in Haiti.

Ayiti Natives is a natural skincare company who believes that “Beauty resides in Nature.” Developed and produced entirely in Haiti, Ayiti Natives beauty products are all made with essentials oils, nuts, and herbs. True to the company name, all ingredients are native to Haiti. Ayiti Natives was founded by Caroline Sada, a Haitian-American who cut her teeth in the beauty biz at Estee Lauder.
Ayiti Natives opened for business in December 2011; a fresh start for Caroline that renders all who use her products feeling the same. Ayiti Natives products are standard in every bathroom throughout the 175-room Marriott Port-au-Prince.

Bijou Lakay by Daphne Karen Floreal is a line of jewelry, accessories handmade by a community of several artisans. These ferocious art workers come from different parts of the country and migrated to the Haitian capital to seek a better life.

Bijou Lakay line combines centuries-old art with a contemporary style that is free and individualistic. Beef horn is one of the most difficult natural materials to work with. Wood, cedar or mahogany, is the second material used to decorate certain accessories. Then come for some limited collections, the addition of gemstones such as turquoise, Jasper, Malachite and even Pearls.

Erica Boulos of Sunny Iron Crafts and Kathleen Jeanty of Bèlfwi are two of the other businesses spotted at D.O.T but not featured on the special.

Prestige is an American-style lager brewed by Brasserie Nationale d’Haïti (BRANA) in Port-au-Prince, Haiti. It is widely consumed and is the best-selling beer in Haiti with a 98% market share. So far it is the only native beer brand.Prestige beer is available in some parts of the United States and other countries. In 2011, Heineken publicly announced it acquired a controlling interest in BRANA by increasing its ownership from 22.5% to 95%.

Prestige was founded in 1976 by Michael Madsen, from one of the richest industrial families in Haiti that arrived from Denmark in the late 19th century. It was launched less than two years after BRANA’s creation. In 2005, Prestige has started being exported to select Canadian and U.S. cities.

J/P Haitian Relief Organization (J/P HRO) is a non-profit organization founded by the American actor Sean Penn in response to the January 12, 2010, earthquake in Haiti. J/P stands for Jenkins-Penn, a reference to Sanela Diana Jenkins, whose foundation supported initial relief efforts, with Sean Penn. J/P HRO programs focus on supporting the residents of J/P HRO-managed camps and the surrounding areas transition from life left homeless by the earthquake to sustainable and thriving communities.
Early on, J/P HRO became camp manager of the Pétion-Ville and Cité Maxo camps, supporting nearly 60,000 internally displaced persons. By the end of 2013, J/P HRO will have achieved a significant milestone in the successful relocation of all remaining camp families. J/P HRO employs nearly 350 people, 95 percent of which are Haitian, to provide health, education and community development, housing and economic opportunities.

José Andrés founded World Central Kitchen after the devastating 2010 earthquake in Haiti with the belief that food can be an agent of change. Training over 30 rising chefs per year, the World Central Kitchen Culinary School creates a talented hospitality workforce for the growing tourism industry in Haiti.Their techniques-based curriculum, designed by their Chef Network, focuses on food safety/sanitation, knife skills, advanced culinary arts, life skills, and professionalism in the workplace.

The school focuses on hands-on training and is led by the most well respected female chef in Haiti, Mi-Sol Chevallier.

Djatawo (pronounced “Ja-ta-woh”) is a superhero created by premiere comics artist and illustrator Anthony Louis-Jeune. Djatawo is a hero for today’s troubled times and his mission is to bring hope to the Haitian population and build awareness of the problems affecting his beloved country. Haitian culture is promoted through his heroic adventures which raise awareness of the problems.