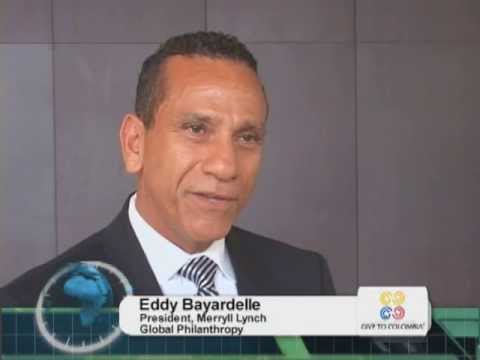 We are pleased to announce we are the official Social Media Sponsors for the 1804List Event in New York on November 12th.

The next couple of weeks leading up to the ceremony,  we will highlight the 2016 Haitian Roundtable inductees to the 1804 List of Haitian-American Changemakers and One’s To Watch.

In 2012 Dr. Carole Berotte Joseph, President of Bronx Community College of the City University of New York appointed Dr. Eddy Bayardelle as BCC’s Vice President for Institutional Advancement. In this capacity, he will serve as the college’s primary steward of the BCC Foundation with responsibility for leading a robust and multifaceted institutional development strategy encompassing grants, scholarships, and fundraising. Dr. Bayardelle oversees cross-sector partnerships, as well as manage BCC’s entrepreneurial arm, with a focus on connecting the college’s workforce development efforts with business and industry.

Dr. Bayardelle brings to BCC a wealth of experience in education and philanthropy. He served as president of the Merrill Lynch Foundation and managing director of the firm’s education-focused global philanthropic efforts. He launched a number of innovative and successful business/school partnerships in support of education for students at both high schools and postsecondary institutions. His efforts at Merrill Lynch raised over $100 million in employee contributions to the company’s annual fundraising campaigns. Prior to joining Merrill Lynch, he served as chief operating officer for the U.S. Fund for UNICEF, overseeing the executive team responsible for education, administration, finance, marketing, and fundraising.

Early in his career, he taught elementary through graduate students. Dr. Bayardelle’s senior executive posts in education include associate dean for Planning and Development and chair of Bilingual Education at the Bank Street College, Graduate School of Education. He co-founded and co-directed the New York Education Policy Fellowship Program at Bank Street College and New York University. He also served as superintendent of schools for Hempstead, New York, and executive director of the New York City Public Schools Division of Special Education.

He has widely lectured and published, and he has been featured in media on the subjects of education and philanthropy. His numerous board appointments vary from international organizations to New York City institutions and include Mayor Bloomberg’s Cultural Affairs Commission.

After serving in the U.S. Army, Dr. Bayardelle received a B.A. in Liberal Arts from Marymount Manhattan College, a M.S. in Educational Leadership from Bank Street College, and a Ph.D. in Teaching and Learning from New York University.