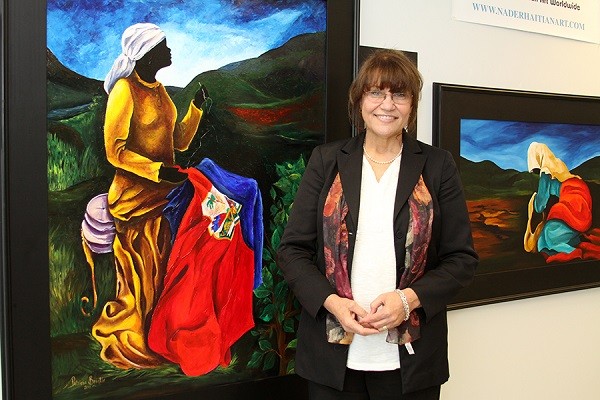 Self-taught artist Patricia Brintle was born and raised in Haiti and immigrated to the United States in 1964. Although she has made the US her residence, her colorful style reflects her native land. Her approach to painting is varied and reflects her feelings at the moment.

Brintle’s work is influenced both by personal and social experiences. Most of her portraits focus on the expression of the eyes and tell in one look the story of the person on the canvas. She favors bright, vivid and vibrant colors and uses much symbolism in her work. Her medium is as varied as her subjects but she prefers acrylics because of its diversity. Her works on the Holocaust are on permanent display at the Holocaust Center of Temple Judea in New York and are used as a teaching tool for visitors.

Her religious work, The First Mother, traveled with the Black Madonna Exhibit which made its debut at the famed National Museum of Catholic Art and History in New York and toured museums throughout the United States. Brintle’s work on nuclear disarmament, A Delicate Balance, won the “Images of Peace” national competition to commemorate the 50th anniversary of Albert Schweitzer’s call for nuclear disarmament and hangs in permanence at the Albert Schweitzer Institute in Hamden, Connecticut.

From Here To Haiti, LTD is a not-for-profit 501 (c) (3) corporation whose purpose is to raise funds for the benefit of the people of Haiti by repairing non-governmental buildings used for public assembly, and by the creation of local employment opportunities for the people of Haiti through that repair work.

Click here  and here to read more about Patricia.