Love, the former city councilwoman and mayor of Saratoga Springs, Utah, was making a bid to be the first-ever Haitian-American to be elected to the US. Congress. Love also would have been the first black woman elected as a Republican in the United States Congress.

Love, just 36, who was born in Brooklyn, faced an uphill battle against incumbent Democrat Jim Matheson, but late polls had given her a strong lead. She ultimately received 48.06 percent of the vote, with Matheson taking 49.34 percent. That represented a difference of less than 3,000 votes.

Some pointed to the run by Libertarian candidate Jim Vein as being instrumental to Matheson’s win. Vein received 2.6 percent of the vote, and some of those votes might have otherwise gone to the Republican Love. Matheson will be serving his seventh term in the US Congress starting in January.

Love’s parents, both natives of Haiti, spent many years in Haiti until emigrating to the United States with, according to Love, just $10 in their pockets.

Mr. Matheson, son of former Utah Gov. Scott Matheson, was seen as vulnerable after losing much of his former district to the redistricting process. Republicans poured in $5 million to defeat him, which was matched by Democrats, a previously unheard-of level of campaign spending for a Utah congressional race. But Mr. Matheson, one of the last of the moderate Blue Dog Democrats, showed why he’s been able to foil repeated GOP efforts to defeat him even in an strongly conservative state.

His campaign softened Mrs. Love’s hold on her base by hammering her support for tax increases as mayor of Saratoga Springs while criticizing her for advocating cuts to federal social programs, including the abolition of the Department of Education – source 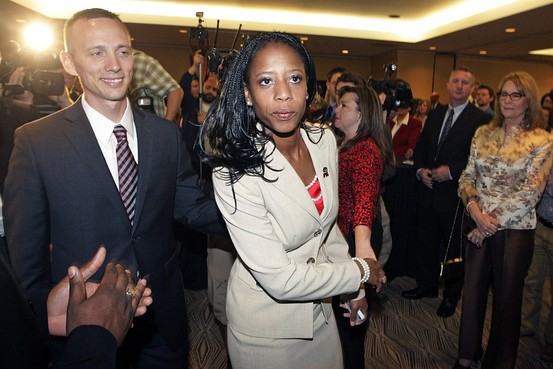