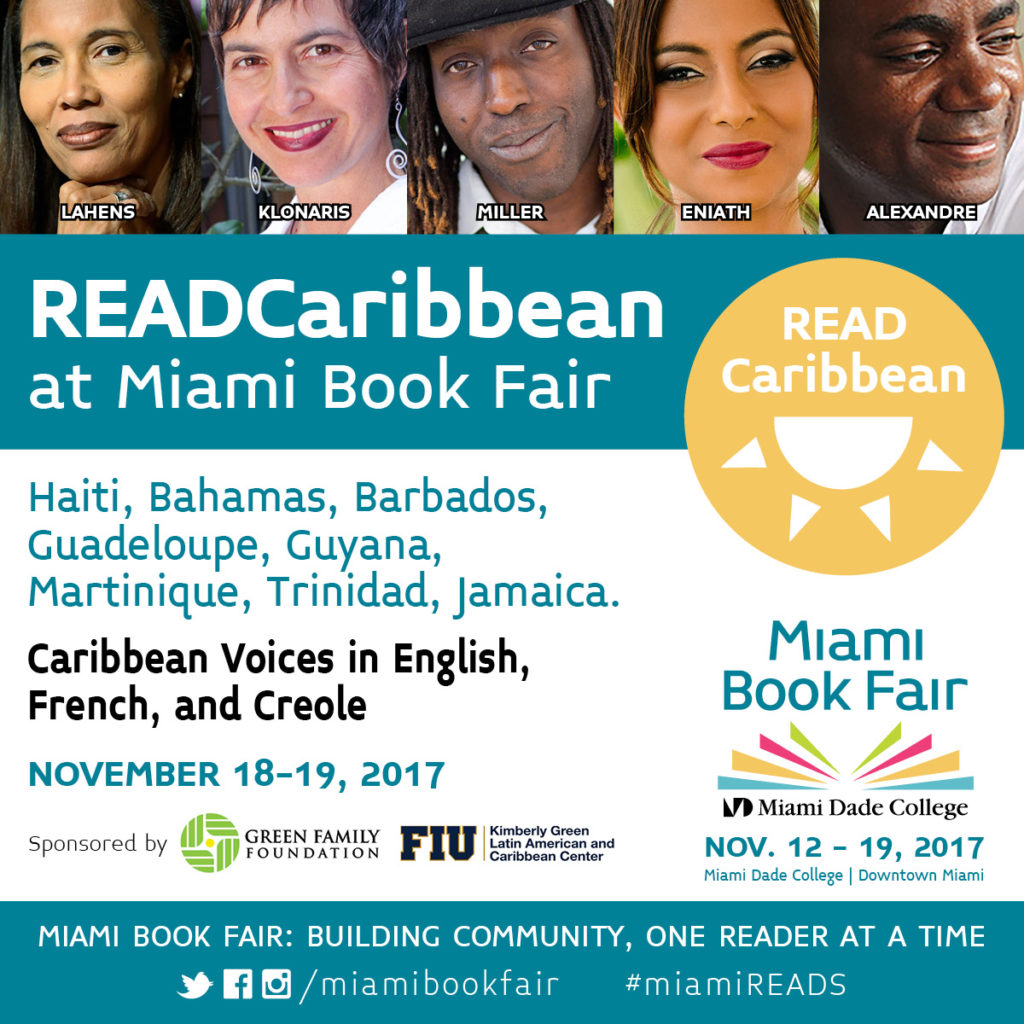 Miami, Nov. 9, 2017 – Miami Dade College’s (MDC) Miami Book Fair (MBF), the nation’s finest and largest literary gathering will present ReadCaribbean, a series including readings, panel discussions and storytelling for children, that highlights the vibrant and diverse literary culture of the Caribbean.  As noted, some author events will take place in Creole or French with simultaneous translation into English.

ReadCaribbean programs are made possible by the support of the FIU Kimberly Green Latin American and Caribbean Center, and the Green Family Foundation. Programs are created in partnership with Sosyete Koukouy, the Consulat Général de France à Miami, and Ayiti Images.

Multi-ethnicity, Racelessness, Indigenismo. These are some terms of identity that have masked the ways that anti-Blackness and ambivalence, if not full resistance to Latin America’s African roots, have evolved in nations across the region. With attention to its historic roots, contemporary manifestations, and present-day movements, these authors offer compelling insight into the ways that race, identity and politics have intersected in Brazil, Colombia, Cuba, the Dominican Republic, and Puerto Rico. With Devyn Spence Benson, Danielle Clealand, Andrea Queeley, Milagros Ricourt.

The world’s first independent black republic, Haiti was forged in the fire of history’s only successful slave revolution. Yet more than 200 years later, the full promise of the revolution—a free country and a free people—remains unfulfilled. Domestic forces have certainly contributed to Haiti’s turbulence. However, external actors, including the United States, the United Nations, and non-profits have always wielded considerable influence on Haiti’s past and her present. This panel will examine how this outside influence affected the country’s notions of sovereignty and its citizen’s efforts to build a truly independent country. With Michael Deibert, Robert Fatton Jr., Robert Maguire, Chantalle F. Verna.

This panel emphasizes the power and imperativeness of allowing voices from the Caribbean to be heard as widely as possible. The circulation of Caribbean voices featured here pertains among many things to: 1) the translation of Caribbean’s literary giants, female and male, into English (both past and present); and, 2) to what has happened when voices from Caribbean have defied odds to be heard. With Kaiama Glover, Aliyyah Eniath Hosein, Helen Klonaris, Kei Miller.

Akashic Books continues its award-winning series of original noir anthologies, launched in 2004 with Brooklyn Noir. Each book comprises all new stories, each one set in a distinct neighborhood or location within the geographic area of the book. Now, two of Trinidad’s top writers masterfully curate this literary retrospective of the nation’s best writing over the past century. With co-editor of the collection, Robert Antoni, and contributors Barbara Jenkins, Shani Mootoo, and Elizabeth Nunez.

80th Anniversary Session of the 1937 Anti-Haitian Massacre in the Dominican Republic: Reflections on the Past on behalf of the Future

As a means of making this fall’s anniversary a meaningful and constructive one, this panel features original and hard-hitting perspectives about Haitian-Dominican relations, and the significance of the history of genocide that took place on the island. These authors introduce new evidence from the nineteenth-century to the present, including the 1937 massacre, to offer insights about race, nation-building, and freedom struggles that resonate beyond Hispañola’s borders. With Edwidge Danticat, Anne Eller, Lorgia García-Peña, Edward Paulino.

Sunday, Nov. 19 (All discussions in Room 8301 (Building 8, Third Floor) except where noted below)

A ReadCaribbean panel of contemporary poets with ties to Canada, Cuba, and Sri-Lanka detail their exploration of poetic forms in Kreyòl and their reflections on the universality of Haitian poetry. With Indran Amirthanayagam, Emmanuel Eugène, Yvon Lamour.

In French, with simultaneous interpretation into English

Part of the popular ReadCaribbean year-round series, this unflinching, provocative, sometimes uncomfortable, but definitely inspiring round table focuses on Caribbean literature and history. Caribbean authors from Haiti, Guadeloupe, Martinique, and French Guyana will discuss their work, along with their lived and inherited experiences, in order to illuminate reality and take the audience on a journey through the many chapters of modern Caribbean life/history. With Alfred Alexandre, Mireille Jean-Gilles, Yanick Lahens, Jose “Stonko” Lewest.

This ReadCaribbean panel examines the political development of independent Haiti from 1804 through present times against the backdrop of the country’s dramatic transformations in the past centuries. The authors elucidate broad patterns in Haitian history, offering insight into the intellectual and political trajectory of the island-nation. With Bayyinah E. Bello, Anthony M. Georges-Pierre, Clarence Renois.

Shara McCallum’s fifth poetry book, Madwoman, explores the world of relationships, race, and colonialism through the lens of her Jamaican womanhood. Canouan Suite and Other Pieces reflects Philip Nanton’s storytelling humor, setting text in creative tension with Caribbean artwork. In Voices Carry, Mervyn Taylor presents poems that travelers unpack like suitcases from Pakistan, Haiti, Jamaica, and Trinidad, far from what used to be home.

Room 2106 (Building 2, First Floor)
A Conversation on Haiti and the Photography of Thony Belizaire

Award-winning Producer/Director of the documentary on James Baldwin, I Am Not Your Negro, Raoul Peck, in conversation with Edwidge Danticat, Yanick Lahens, and Russell Banks on Haiti and the photography of Thony Belizaire.

In English, with simultaneous interpretation into Haitian Creole

Former Poet Laureate of Jamaica Mervyn Morris presents half a century of poetry with an intense musicality in Peelin Orange: Collected Poems, reinventing how universals can inhere in the local, the incarnation in a Caribbean setting. Kwame Dawes’s City of Bone haunts us with its own musicality, from the drum to reggae to the blues to jazz to gospel. Moderated by poet, novelist, and playwright Geoffrey Philp.

Tensions in the Truths of Haitian History

This ReadCaribbean panel explores the ways that opposing sentiments and circumstances have existed simultaneously in the history of Haiti’s social, economic, and natural environments. The authors focus on the tension in such truths, such as: the ability to critique and identify with Vodou; the experience of belonging to and feeling on the margins of a society; the affinity and aversion of cultivating economic ties with foreign states; the promotion of and flagrant disregard for natural resources and historical treasures. With Jocelyn David, Fritz Deshommes, Dr. Jean Fils-Aimé.

For a complete list of authors of Caribbean heritage, please visit www.miamibookfair.com, call 305-237-3528, or email wbookfair@mdc.edu.

Find the Book Fair on social media at: