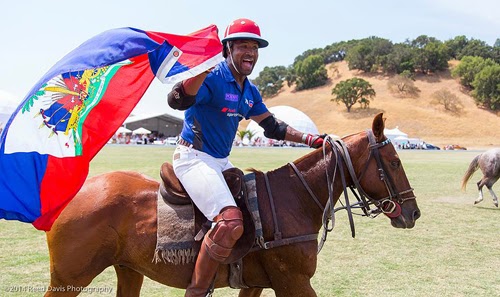 A few weeks ago we posted this story about Haiti’s Polo Team historical win in their very first International Polo Tournament on August 3rd. The team which comprised of Akin Sotomi, Francisco Pizzaro and Peter Laughlin was lead by their Haiti born captain Claude-Alix Bertrand.

I worked hard with POLOSF to get Haiti (a new team) in the right bracket and accepted in international tournaments,” shares Bertrand. “My goal is to promote the growth of tourism in Haiti’s rebirth, and to give Haiti a face, a root in polo the Sport of Kings.” – Claude-Alix Bertrand.

Thanks to these magnificent four players, Haiti is now placed in the rankings of the world’s Polo associations and  will be allowed to participate in numerous tournaments throughout the world. The team is scheduled to compete in the South American International Polo Championships in Cordoba, Argentina from October 8th to 12th but before they leave, Claude will travel to Haiti to be honored by his country.

Captain Claude-Alix Bertrand received an official invitation from the Ministry of Tourism and Creative Industries to travel to Haiti from September 4th till September 8th. The President of the Republic of Haiti, his excellency, Mr. Michel Joseph Martelly, Prime Minister Laurent Lamothe, and Minister of Tourism Stephanie Balmir Villedrouin along with several other Ministers will honor Captain Claude-Alix Bertrand for his achievement as an International Polo Player.

The celebration will take place at the Presidential Palace on September 5th, 2014. During his stay, the first beauty pageant organized by the Minister of Tourism “Miss Haiti” will take place in which Claude-Alix Bertrand will serve as the official “Guest of Honor.”