Although Haiti did not win the game, I am still very proud of their hard work and effort. The team played a very good game and scored on the Champs. The final score was Spain 2, Haiti 1. According to fans and friends who attended the game, although Haiti lost, the stands were filled with Haitian supporters who cheered the team on as if they’ve just won the world championship. Win or lose we love our Haitian players.

According to Sports Illustrated:

Santiago Cazorla and Cesc Fabregas scored early goals as World Cup champion Spain beat Haiti 2-1 in an exhibition Saturday. Playing the first of a two-city U.S. tour, Spain controlled the ball and made repeated attacks on goal throughout the first half and withstood a spirited second half response from Haiti. “In the second half we reduced our pressure and intensity and Haiti responded,” Spain head coach Vicente del Bosque said. “This was a good test for our team.” Del Bosque, who made four substitutions in the second half, was not stunned by the close margin.

“Haiti is ranked 59 in FIFA, it’s not as if we were playing number 208,” del Bosque said. “They were a good first rival to help us adjust to the different time zone and to obviously improve our game.” Spain struck quickly on Cazorla’s goal seven minutes into the match. Cazorla dribbled toward his left and converted on a 20-yard shot that landed inside the right pots. Fabregas’s goal in the 18th minute increased Spain’s lead to 2-0. Juan Mata’s pass found Fabregas five yards inside large area, where Fabregas beat Haiti goalkeeper Frandy Montrevil with a header. Spain had an opportunity at a third goal in the first half but Montrevil deflected Jesus Navas’ shot deep in the penalty area. Kervens Belfort had Haiti’s best scoring threat of the first half when his shot from 12 yards sailed wide right in the 13th minute.

“In the second half, our team gained confidence that we lacked in the first half,” Haiti coach Israel Blake Cantero said. “There is no doubt there was significant pressure considering the opponent we faced. “We are still evaluating our roster and strategy but I was very pleased how we performed.”

Haiti got on the scoreboard on Donald Wilde’s goal in the 77th, thrilling the announced crowd of 36,535 at Sun Life Stadium. Wilde dribbled through the Spanish backline deep into the left wing of the penalty area. Goalkeeper Pepe Reina attempted to cut Wilde’s angle but Wilde beat him with a shot that landed inside the far post.

Roberto Soldado had Spain’s best scoring opportunity of the second half when his shot from deep inside the penalty area bounced off the right post. Spain will play Ireland on Tuesday at Yankee Stadium and then leave for Brazil to play in the Confederations Cup, which runs from June 15-30. Haiti also will play an exhibition on Tuesday, traveling to Brazil for a match against Italy. 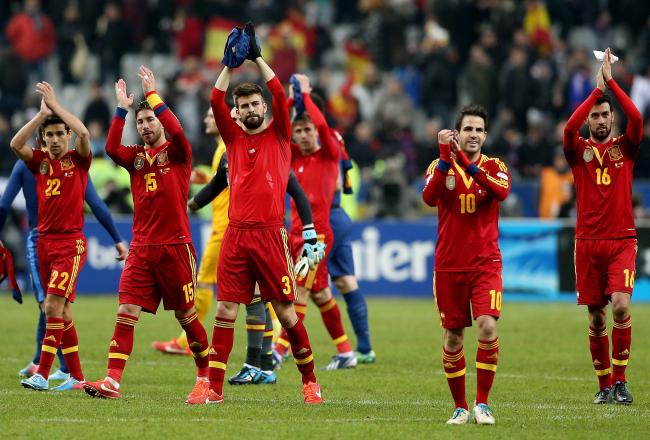