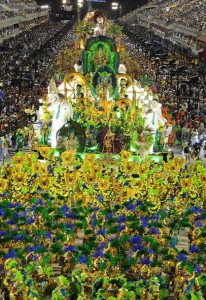 Revellers of the Imperatriz Leopoldinense samba school perform during the first night of Carnival parades at the Sambadrome in Rio de Janeiro on February 19, 2012. Rio’s two nights of famously extravagant Carnival parades began late on February 18 in a burst of fireworks and to the cheers of festival goers who have been partying on the streets for days. AFP PHOTO/VANDERLEI ALMEIDA (Photo credit should read VANDERLEI ALMEIDA/AFP/Getty Images)

The group stage in the 2021 CONCACAF Gold Cup is s

Haiti’s interim government said Friday that it a

According to [ @NYPost] The hit-squad members who

In response to a question from CTV News about when

"Perhaps we should give athletes the right to take