“Perhaps we Haitians should tell the whole world that being the FIRST BLACK NATION is no walk in the park and we have the scars to prove it.” – Woodring Saint Preux 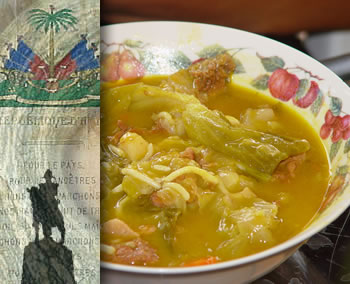 This symbol is the last symbol of unity and freedom we have left.

We do it EVERY JANUARY 1st of every New Year in order to remember our past, our struggle for FREEDOM, and our ongoing fight to remain free. What better way to celebrate the New Year than with the very soup that we were not allowed to drink as slaves?

The most important New Year Celebration in Haitians history is New Year’s Day, January 1, 1804. We fought for nearly thirteen years before this day so that we could initiate this symbol of freedom for ALL slaves ALL over the world.

Before 1804, A Haitian slave was NOT allowed to touch Joumou, a delicious and aromatic pumpkin that was a favorite for her white French master. Haitian Slave Diet: He/She was to eat one ounce of salted meat or fish and one bottle of lemonade per day. When our ancestors finally kicked the French out of the island, The Party was on! We fought the French and we won!

On Sunday January 1, 1804, the Haitian slaves of yesterday started gathering at dawn at the “Place d’Armes de Gonaives”, it was there that Jean Jacques Dessalines mounted the Autel de la Patrie to speak. He made his speech in Kreyol so everyone could understand him. “Liberte ou la Mort!” “Long live independence!”

Jean Jacques Dessalines declared that Haitians would forever live free and die free. “Cannons were fired, church bells rung, people cheered, and, they say kettles of fragrant soup Joumou perfumed the air, ready to be ladled up in a mass communion.” Lately, the consumption of soup Joumou has become just an old habit for Haitians. It seems we have forgotten its true history and purpose.

Soup Joumou – This soup was the touchstone of Haiti’s fervent wish for peace and freedom Soup Joumou was a symbol of communion and brotherhood.

Perhaps we should re-attach the symbolism of independence to the oldest Haitian Tradition – a good old bowl of delicious soup Joumou.

On January 1st, 2004, Haitians celebrated 200 years of freedom. 200 years of misery! Perhaps we – Haitians – should tell the whole world that being the FIRST BLACK NATION is no walk in the park and we have the scars to prove it. On January 1, 2004, we once again made, drunk, and shared some Soup Joumou. It was the 200th serving of the most delicious soup on earth, our Haitian “Soup of FREEDOM”.

We Haitians (FIRST BLACK Nation in the world) drink our soup Joumou on our INDEPENDENCE DAY.

My First Attempt At Making Haitian Joumou Soup (Recipe Inside)
Kreyolicious Repost: 12 Things You May Not Have Known About Haitian Independence Day