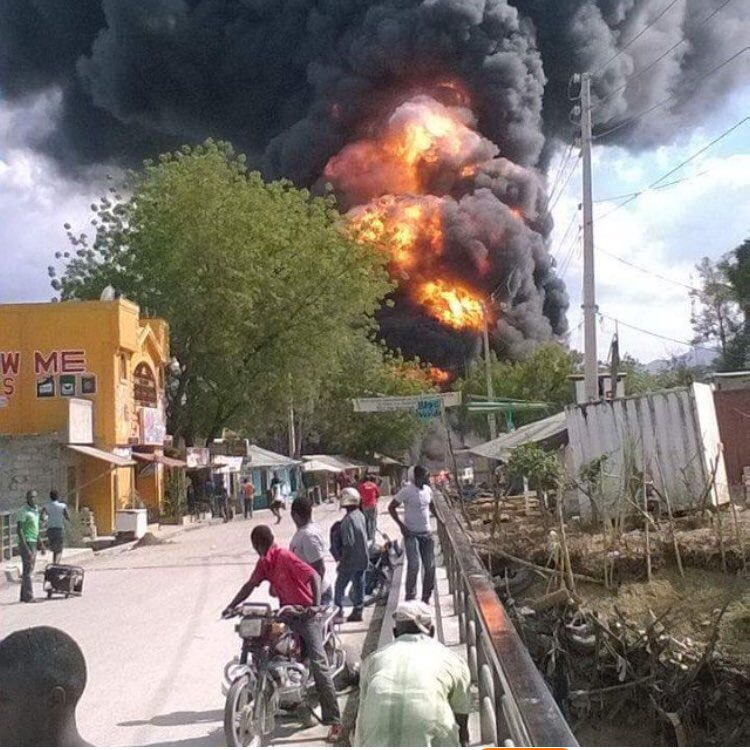 At least seven people were killed and about 30 others seriously burned Thursday in Haiti when a tanker truck transporting fuel for the Total oil company caught fire and exploded.

The National Police of Haiti (PNH), the Directorate of Civil Protection (DPC) the Ministry of Public Health and Population (MSPP), the Haitian Red Cross and the Scouts of Haiti have intervened, however, more 30 injuries have been reported, 2 of the burned were transferred to Port-au-Prince and 1 to Mirebalais hospital Center, 7 people were burned alive according to a provisional toll.

Witnesses told AFP that the tanker truck hit a wall and spilled fuel as it was preparing to unload at a Total service station. The flammable liquid spread and caught fire when it reached vendors cooking food on outdoor grills. The flames quickly returned to the tanker, which set off the explosion.

Seven people died on the spot, and the burn victims were rushed to area hospitals and to Port-au-Prince for treatment, the Civil Defense office said.

“I saw people screaming as they were being burned alive, and no one could come to their aid,” a motorcycle taxi driver told AFP.

Hinche, like many Haitian towns outside of the capital, has no fire department.

“Blue Helmet” soldiers with the United Nations stabilization force rushed to the scene and were able to contain the blaze.

Four homes neighboring the service station also went up in flames, and 22 vehicles were destroyed, local authorities said in a preliminary assessment. The truck was an independent carrier that loaded up with Total oil and delivered it to service stations, but “did not belong to Total,” a spokesman for the French oil company told AFP, correcting earlier reports.

The vehicle had been inspected and met all safety standards, the spokesman said.