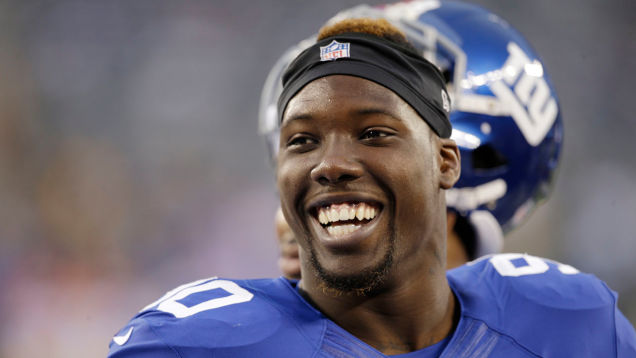 Yesterday while most people were recovering from their Fourth of July festivities, news hit the internet that Haitian-American Giants defensive end Jason Pierre-Paul seriously injured his hand in a Saturday night fireworks accident. The news spread throughout social networks with conflicting reports of the  26-year-old injuries.

By the end of the Sunday night, Andy Schefter confirmed that JPP’s was meeting with doctors and his injuries weren’t career threatening. The good news for JPP is his hand will reportedly be all right. The bad news is, according to NFL.com, the incident caused the Giants to pull a $60 million contract offer off the table.

Pierre-Paul, the Giants’ 26-year-old star defensive end, suffered a serious but apparently not career-threatening hand injury Saturday night setting off Fourth of July fireworks at his South Florida home.  While the full extent of the damage is not yet known, it is believed Pierre-Paul’s suffered significant burns on his palm and several fingers, and one finger may have sustained nerve damage, according to a source with knowledge of the situation. He was admitted to North Broward Medical Center in Deerfield Beach, Fla., for treatment.

It was not known Sunday night whether the condition of Pierre-Paul’s hand will affect his availability for the start of the season. Early, premature reports stated he lost one or several fingers in the accident, reports that were “overblown’’ according to a Giants source. Given the damage that could have been inflicted, JPP is probably fortunate his injuries were not more severe. As for the recklessness of an adult — and an NFL player — shooting off fireworks, the Giants will have to debate that internally.

It seems as though it was no secret JPP was preparing for a massive Fourth of July display, as people claiming to be his neighbors took to Twitter to post pictures of a U-Haul supposedly rented by Pierre-Paul filled with boxes of fireworks. One of those neighbors tweeted “I’m currently scared for my houses safety.’’

Pierre-Paul Saturday posted a video on Instagram, holding his infant son, saying something about “Talking about fireworks on the ground’’ with the U-Haul visible in the background. (video below) – Continue reading at NYPost 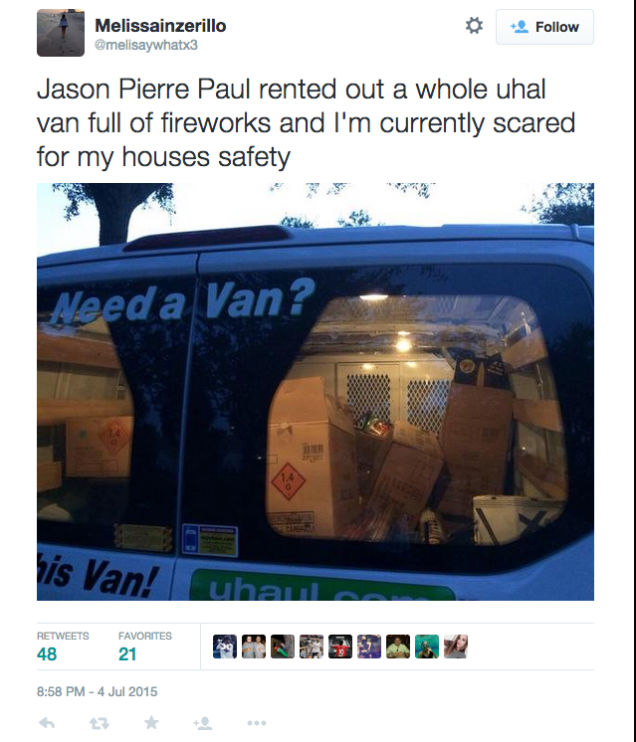 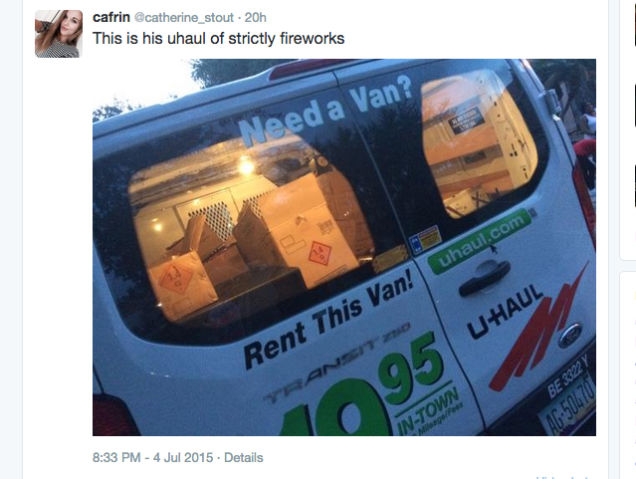 Sunday night, Andy Schefter confirmed that JPP’s injuries weren’t career threatening which was good news for JPP and his fans but  the bad news is, according to NFL.com, as of this morning, the incident may have caused the Giants to yank a $60 million contract offer off the table.

Jason Pierre-Paul expected to meet with doctors, they will have their say, but early indications are, hand injury is not career threatening.

JPP has burns on palm, 3 fingers. 1 finger could have nerve damage. Didn't lose any fingers, team thinks he'll be OK, per @DanGrazianoESPN.

According to SB Nation,

The New York Giants are withdrawing a long-term, $60 million contract offer made to defensive end Jason Pierre-Paul, according to Ian Rapoport of the NFL Network. Pierre-Paul severely injured his hand in a fireworks accident on the Fourth of July, making his immediate and long-term future with the team uncertain.

This is a contract offer that’s likely been on the table for some time as the two sides work to avoid Pierre-Paul playing on the $14.8 million franchise tender that has been extended to him. Pierre-Paul has not yet signed the tender and thus, the 26-year-old wasn’t officially under contract when the incident occurred. There’s been no talk about the Giants rescinding the franchise tag at this stage, a move that would make Pierre-Paul a free agent. Pierre-Paul wasn’t planning on signing the $60 million deal, according to the report.

The deadline to sign an extension before Pierre-Paul is forced to play on the franchise tag is July 15, and it’s likely the two sides would have kept negotiating a long-term deal leading up to that date. With the injury being so recent, the Giants don’t have all the information they need to keep that kind of deal out there. – Continue Reading at SB Nation,