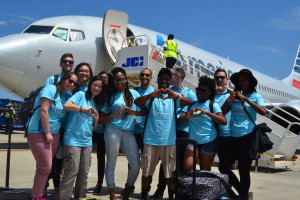 We are on Day 3 of our exciting trip alongside KORE Haiti via daily blogs from their group of medical students, professional students, and medical professionals in Cap-Haitien Haiti.

The sounds of cars honking past street vendors who were peddling hand-made goods is how today began. Cap-Haitien barely sleeps and we, like the city, have a lot to do. Today’s first meal consists of melon, ze fri, ak100 and pan ak frommage (melon, scrambled eggs, porridge and Haitian bread with cream cheese). Delicious as it was, does anyone really taste breakfast before 7:00 am? I know I don’t.

At the breakfast table I saw looks of worry and unease. Medical student Nammi appeared calm and calculating; she was ready. Before we knew it, we arrived at a crowded school, Le Fondemont. “Bonjour Monsier et dam!” “Bonjour” was the call and response as we greeted our patrons and began setting up.

Before we arrived, the school staff handed out numbered tickets. The first station was triage; two members sat at the entry way taking down patient information. “Kijan ou rele” or “What is your name?” the question that starts the whole process.  From there a guide led the patient into one of three medical student stations for physicals and vitals.

The next stage was consultation with one of four Haitian medical professionals: two physicians and two nurse practitioners. At the end, they were to receive a prescription.  Finalment, the last station visited was the pharmacy where they would be handed medication. We stayed really busy!. By noon we were serving drugs to patient number 72 all while those waiting were approaching the numbers 104.

There’s something for which we hadn’t accounted: communicating with the patients. Major congestion manifested because of the lack of Haitian-Creole speakers in the pharmacy. Midway through lunch time a number of us had not eaten. We were falling with nothing to hold on to. Without the option of failing, we had to alter our plans.

Shifting our attention to the pharmacy, we doubled our production rate. Though we were moving twice as fast, we had such a pileup that it wasn’t until the day ended that we felt relief. Nammi epitomized the phrase “Put the team on her back” in her MVP-worthy effort. As closing time approached with patients 136..137…138 receiving their medications, the silver lining was in enjoying innocent laughter with the kids as we gave out crayons, candies and stickers. “I think one of those kids had about eight stickers on his face, and he wanted more,” a student said

Most battles are won before they even begin: 50% of the key to winning is preparation. The other half is 25% skill and 10% luck and 15% adaptability (rough estimates). As we gathered around the dinner table reflecting on our first day of clinic, we knew the latter is what saved us. When you are falling, there are only two outcomes: catching yourself or allowing the ground to catch you.

As luck would have it, two rubber bands, half and sandal, a paperclip, and 4 large Ziploc bags would’ve saved us from imminent peril if our team included MacGyver. However we did not. In his stead, our 14 students, 4 professionals and loads of adaptability sufficed. Tomorrow we get to do this all over again and we’re ecstatic. I know day two will follow in suit: accomplishing what we set to do. The night will give us much needed solace. Until then, nap kembe.