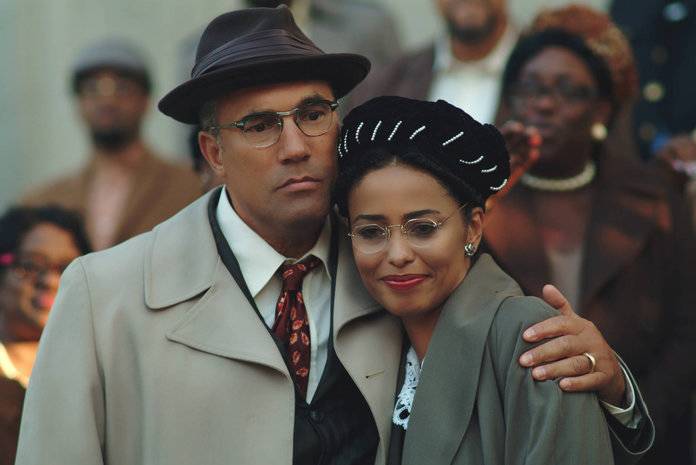 Rosa Parks is a household name, renowned across the country as the brave woman who refused to give up her seat and kick-started the Montgomery Bus Boycott and Haitian-American actress Meta Golding is playing the most famous women in American civil rights history starring in the movie “Behind The Movement.

“Behind The Movement” premiered Sunday, Feb. 11 on the TV One network.

Set in 1955 during the days preceding the Montgomery bus boycott, it chronicles the behind-the-scenes story of how Parks sparked a landmark civil rights protest by refusing to give up her seat in the “colored section” to white passengers.

“It was quite intimidating, but such an honor to just even attempt to step into her shoes,” Golding told NBCBLK. “It’s a departure from her other roles, which include “C.S.I. Crime Scene Investigation” and “Criminal Minds” and a bloodthirsty evildoer in the big screen “Hunger Games” blockbusters.

By refusing to give up her seat to a white man on a Montgomery, Alabama, city bus in 1955, black seamstress Rosa Parks helped initiate the civil rights movement in the United States. The leaders of the local black community organized a bus boycott that began the day Parks was convicted of violating the segregation laws.

Led by a young Rev. Dr. Martin Luther King Jr., the boycott lasted more than a year—during which Parks not coincidentally lost her job—and ended only when the U.S. Supreme Court ruled that bus segregation was unconstitutional. Over the next half-century, Parks became a nationally recognized symbol of dignity and strength in the struggle to end entrenched racial segregation.

Golding who was born in Port-au-Prince is a Cornell University alum who majored in political science, speaks four languages and grew up living in countries around the globe as her parents worked for food relief groups. For the Parks role, she took a deep dive into the available research, reading everything about her she could get her hands on and watching archival interviews.

“I only had a couple weeks to prepare, and that was very daunting because I don’t want to be known as the person who got Rosa Parks wrong, or [who] disrespected her legacy” Golding, 46, told NBC News. “So, I was really afraid, but sometimes I think fear can be a catalyst to inspiration.”

“Behind The Movement” premiered Feb. 11 on TV One and you can find more information on how to watch here.