Author’s note: The general idea behind this article is probably applicable to multiple societies, but being Haitian, I decided to take my examples in our community.

“Mouvman bully a telman impregne nan kilti nou, defwa n ap bully yon moun san rann nou kont, e zorey nou simante pou si yon moun ta vle fe nou we sa n ap fe a pa bon.” (Our culture makes bullying seems so normal that even if someone were to tell us it is wrong, we would not listen.) @RomeroBoukman. I was working on my article when I saw this tweet and I thought it was the best way to introduce the subject. Bullying is a taboo in our community for many reasons. I believe many of us do not really know what it, see it and do not know how to react to it or they don’t think it’s a big deal. So what is bullying? What are the different types? It effects? What is the difference between harmless teasing and bullying? What does bullying inside the Haitian community look like? How can we prevent it?

First, let’s  analyze the concept and its various aspects. Let us begin with a very simple yet explicit definition of the concept. According to the NCAB (National Centre against Bullying), bullying is when an individual or a group of people with more power, repeatedly and intentionally cause hurt or harm to another person or group of people who feel helpless to respond. This sort of abuse can happen anywhere. For instance, at school bullies may find their victims in their classroom, on the playground or at the cafeteria. When it occurs online, (which is common nowadays) we call it cyberbullying.

The effects! Bullying is linked to many negative outcomes including impacts on mental health, substance use, and suicide. Bullying can affect everyone – those who are bullied, those who bully, and those who witness bullying. For instance, victims and witness of bullying may experience depression, anxiety, eating disorders, health complaints etc. Some of the victims might start using violence as a way to retaliate. Bullies can also engage in violent acts and they are prone to alcohol and drug abuse. They may become abusive partners and parents.

Second, let us talk about the difference between harmless teasing and bullying. We all tease people every now and then. There is nothing wrong with that unless we do not know where the line is. When friends are making fun of each other and are, willing to stop when asked to, it is not bullying. Teasing is harmless when people do it with no intention to harm and when it is not repetitive. Bullying on the other hand, as we have seen before, hurts people. It happens often and it comes from people we are not close to.

Now that we have pointed out the various aspects of bullying, let us venture into the subject at hand: bullying in the Haitian community. “In Haitian culture, bullying is a way of life, people use it as a way to crack a few jokes without realizing the number of damages their words are doing.” (Gabrielle Désir on bullying in Haiti). Although she now feels confident in her body, growing up, schoolmates bullied Gabrielle for her looks. Having big breasts, people used to tell her that she had an “unproportioned body”. They made fun of her, sometimes even touched her boobs as they laughed and walked by.

People actions had a lot of negative effects on her self-esteem and social life (even outside of school). “I hated my body, I begged my mom to pay for a surgery for me when I was 18. She refused categorically…. I promised myself that my first paycheck would be spent on breast reduction surgery. When I went to the doctor, my first paycheck was not enough (lol). So, I got more info about the procedure and the risks that I was exposing myself to. I had an estimate and started saving up. I still did not have the surgery. It took me years to be comfortable in my own skin.” Gabrielle suffered alone. There was no one she could turn to. At school, when she tried to speak up, they patronized her. They told her she could not take a joke or that she should simply toughen up.

Sometimes, we fail to understand the magnitude of what is happening to people. We tell them that they are overreacting, that it is not a big deal. Men sometimes have it worst. Since they “have to” be strong all the time, we tell them to “man up” even when they are abused.

Similarly, Steven Baboun, one of the most creative minds of my generation suffered. “Well, I am still being bullied in a sense… Growing up, yeah I have been bullied. Nothing too physical, which I am grateful for, but it was psychological and mental torture. You know. Kids calling me “masisi” or kids spreading rumors about me, or just saying: “you act too feminine” “you act too this” and a lot of times boys would be like “Eww. Don’t touch Steven.” or “Don’t go near him. He’s going to like hit on you or grab your penis or turn you gay”…. Now the bullying became towards my art not really towards me. People would send me hate messages like: “You art is this, it’s that. You are a disgusting person for even creating this and calling it Haitian.”

Just like Gabrielle, Steven had no authority figure to turn to when he felt he was being psychologically abused at school. His friends did what they could to help him cope with the pain. They are still the ones supporting him now.

In the same way, kids bullied Kims Beljean because of his weight when he was a young. They saw him as a brute and excluded him. They only came to Kims when they needed help dealing with older kids they wanted him to fight for them. He also suffered at home, his parents repeatedly teased him because they thought he was ugly. In high school, they rejected him because of his skin tone and the acne on his face. They called him names like “figi klavye òdinatè” etc. Although Beljean has turned his pain into art, we can imagine how painful it was for him growing up.

Someone also sent me this: “My sister has been bullied twice in her life and they made group chats about her, people faked being her friend to work out plans. They tripped her, humiliated her, badmouthed her… While researching I heard many similar stories regarding bullying. Some of my friends have been bullied because of things like their voice, body, eyes etc.

Haitians can bully people without even realizing it in some circumstances. We have been doing it for so long, that we do not even think about the consequences. For instance, we have a tendency to point out people’s disabilities. We give them derogatory nicknames like “Kokobe”, “Boul nan do”, “ti je”, “bèbè” etc. We also bully people based on their skin tone by calling them “ravèt blanch” or “fòs fènwa” or because of their origin “Nèg andeyò”, “fanm mònn”...

Here is the last point of this article: how do we prevent bullying in our community. “Kids who get bullied need psychological assistance but due to our mentality and our beliefs parents don’t allow them to because we associate psychology with being crazy and kids aren’t allowed to feel like they need support mentally.”

(A woman whose sister is a victim of bullying at school) Her words reminded me of a comment on my article about Haitians and depression. A man said: “That ain’t nothing but white people sickness…Only Haitians suffering from this are Haitians trying way too hard to be white.” I was shocked for a second. Then I remembered that it was not my first time I’ve read comments like this and what’s sad is a lot of people don’t realize thoughts like this are trivialize the pain of those suffering. These are the reasons some victims do not come forward and many suffer in silence which sometimes ends up turning into a depression, alcohol or drug abuse and at times, suicide.

I feel like it’s time for the community to realize how important mental health is. We should drop clichés like “It is a white people’s thing” or “Haitians are too strong for that” or “Byen li twò byen” etc. Recently, I tweeted two polls (the first one was about whether you have been bullied and the second was about whether you found help at school if you were). 56 % of the voters said they have not been bullied (first poll) and 67% said that no one at school cared (second poll). I know that a poll on Twitter with a small group is not very scientific but it gives us an idea.

With that being said, I think that in our schools, we should have a system that helps prevent bullying. We should train our staff members to recognize bullying school grounds. We should also talk to the kids; let them know how wrong it is. We should show them how to treat each other with respect and kindness. We should give assistance to those in need to help them deal with the pain. We should also help the bullies for sometimes they are suffering themselves and simply crying out for help. 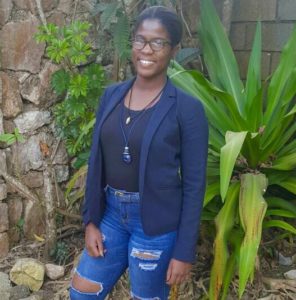 Sally Riché is a young Haitian blogger, poet, linguist, psychologist and English teacher. Born and raised in Haiti, she writes articles in which she addresses some issues in the Haitian society.

To do so, Sally uses her own experiences and those of people in her surroundings. Living in Haiti, her findings are based off testimonies given by people sharing her situation. Ms. Riché wants to do qualitative research, therefore, she won’t be using numbers as data for her analyses.